1984. Mrinal Sen. Based on a short story 'Telenpota Abishkar' by Premendra Mishra. Three friends (Pankaj Kapoor, Naseeruddin Shah and Annu Kapoor) visit an ancestral palace which is in ruins. Most of the family members died of malaria and only one surviving family still lives there - an invalid mother and her daughter (Shabana Azmi). The mother is hoping to see her daughter married and mistakes the boys for one of her relatives who had promised to marry the daughter. The young men leave after three days, but things change during that visit. 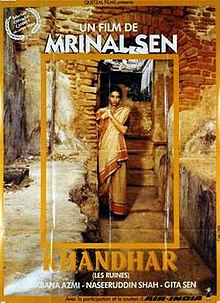 Posted by Harimohan at 6:47 PM