Michel, a smooth-talking criminal steals a car, shoots a policeman and is on the run. He is hounded by the police and finds a place to hide with an American student. She finds out later that he is wanted by the police, initially tries to protect him and then gives him up to the police. Michel is sho by the police in the end. 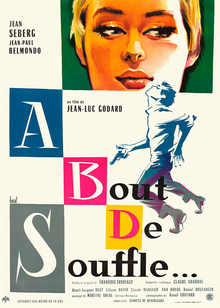 Posted by Harimohan at 9:08 PM

Sir I request you to write some tamil movie reviews!!🤗🤗