1976. Sidney Lumet. A story about a fictional network that starts with the firing of their star news anchor who turns rogue the next day and announces on air that he will kill himself on air. Clearly, the man is in some kind of trouble but the network decides to use this sensational piece of news to improve its ratings. How the whole show becomes about ratings and money and less about people and the 'real' job is what the story is about. For a 1976 movie, it is as relevant today as it was then. Only difference - now there is really no talk of ethics from any corner.

Peter Finch got an Academy award posthumously for his role as Howard Beale, the news anchorman who later becomes a prophet. 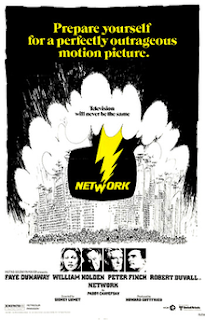