2019. Caste atrocities story based on the Kilvenmani massacre of 1968 when 44 farmers (let's not address them as dalits and reduce the import of the murder - even dalits are people!) were murdered by a gang of landlords and 200 of their henchmen. Of the 44 dead, 23 were children, 16 were women. They hid in a hut when the landlords attacked them and the hut was burned down, the fire systematically fed. The courts acquitted the leader of the landlords (the Paddy Producers Association) Gopalakrishna Naidu - who was subsequently killed in a revenge killing in 1980.

'Asuran' uses caste inequality as the core theme, leads into the farmers forming a union to seek better wages and conditions and how the landlords take revenge on the poor farmers. It gives a glimpse of how  the poor were treated - cannot wear slippers (if you do, they will beat you), fall at everybody's feet for any perceived misdemeanour, how the police, landlords, government, judiciary are all together against the poor. 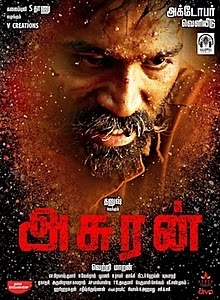 Posted by Harimohan at 2:02 PM

Thanku so much for considering my request. I hope you enjoyed the acting of the hero in this movie