1990. Tapan Sinha's movie based loosely on the story of Dr. Subhash Mukhopadhya who pioneered the second in Vitro fertilisation int he world, just 67 days after an English physician did. Harrassed by the West Bengal government and the Indian government, he committed suicide in 1981. Dr Mukhopadhyay was the doctor who pioneered India's first test-tube baby in 1978, a recognition which was given to him when Dr. Anand Kumar who was credited with the achievement in 1997 discovered this fact and duly corrected the error. 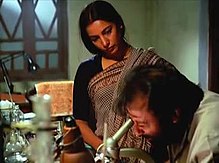 Pankaj Kapoor plays Dr. Dipankar Roy who is conducting research on curing leprosy on his personal time at his personal expense and is making significant progress. He dedicates ten years of his life and when he makes a breakthrough, a well-intentioned journalist prints the story which catches the eyes of other jealous members of the fraternity to move to discourage and discredit him. But Roy has his band of loyal supporters too.