Ozu uses the same actors, even the same names and perhaps even the same locations - the house is the same as in 'Tokyo Story'. Setsuko Hara's name is Noriko in this movie as in Tokyo Story. The story of a daughter who loves her widowed father so much that she doe not want to get married. The father has to resort to a lie to get her married fro her own good.

Setsuko Hara's story is fascinating - born in 1920, she started acting when she was 15, started working with Ozu in te 1940 in her late twenties by which time she had already acted in 67 films, worked on six films with Ozu two of which are world classics, and stopped working or being in public in 1963, the year of Ozu's death. She never married and died in 2015, aged 95. She's beautiful, graceful and elegant. Watched it on YouTube. 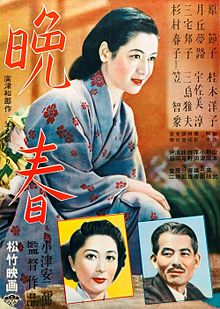 Posted by Harimohan at 2:26 PM