I watched in sometime in 1995-96 in my Mumbai flat in Nerul and though i remember liking it, didn't really gather the full import of the movie. So I decided to rewatch it and enjoyed it immensely. Tom Hans as Forrest Gump, sitting at a bus stop and telling his story to whoever cares to listen - hi childhood, mother, Jenny, growing out of leg braces, football, college, All American team, White House, military, Vietnam, Bubba, Lt Dan, Medal of Honour, Jenny, Dan, Shrimp business, Black Panthers, Watergate, John Lennon, and then he takes off on a three-year run criss-crossing America. Then Jenny again and little Forrest. It's like 'We didn't start the fire' with Tom Hanks playing the role of his life. The scene in the end when he tells Jenny about how when he saw the skies at dawn and felt that he didn't know where heaven ended and earth began - ah, my heart just expanded. Beautiful. 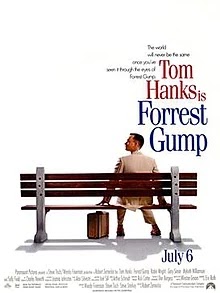 Posted by Harimohan at 9:19 PM