Wonderful, wonderful stuff. This little movie takes on all the big love stories and gives them a run for their money with its breathtaking freshness, honesty and uncorrupted love. Ten year old Gabe gets a new partner in his karate class, his old kindergarten classmate, Rosemary. The ten year old's loathing for girls undergoes a change pretty soon and Gabe falls hopelessly in love with Rosemary. 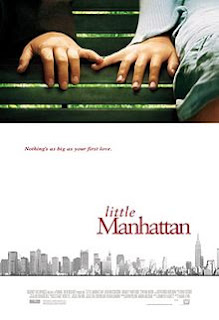 Rosemary is far better than he is at karate, comes from a rich and successful family (Gabe's parents are on the verge of breaking up) and Gabe's love for her grows every moment. He finds himself circling her house trying to catch glimpses of her, being tongue tied when she is around, wanting to spend time with her and impress her etc. Rosemary likes him too, and they go for walks, practice karate, even go for a music show with Rosemary's parents. He overcomes his shyness and holds her hand, finds his palm sweating and Rosemary withdraws her hand. Gabe is crestfallen, and then Rosemary seeks his hand again. Ah, wonderful. After the show Gabe kisses her briefly and she quickly moves away. Gabe is not sure if he did the right thing. 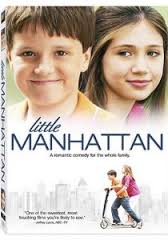 Gabe is in love, does not know how and when to tell her that. To add to his woes Gabe is separated from Rosemary in the karate class and a better karate fighter, a good looking young boy is paired with her. Gabe is jealous. He gets mad at Rosemary. He knows she is going away to summer camp and probably off to a private school after that, and he cannot stand being separated from her. H does not know why she is so busy in these last few days and cannot meet him. He calls her and tells her he hates her. She is confused and yells back too that she hates him.

And then Gabe cries. Pure, unadulterated pain. 'Rosemary' he screams, tears flowing down his eyes. 'Rosemary' - and its so funny and tragic at the same time. His parents hear him and his father goes to talk to him about girls. Gabe wants to know if love comes to an end always - his is coming to an end, his parents love story is coming to an end too. His father says - 'You know we stopped saying things to each other and the unsaid things started to pile up. Then there were so many unsaid things that we completely stopped talking to one another.' Gabe is surprised. 'Then why don't you just go and say em Dad,' he says. His father nods at the simplicity of it all.

It makes much sense to Gabe too. He runs all the way to the wedding that Rosemary is attending, to get rid of the unsaid things that are adding to the pain in his heart. And he tells her as simply as he can. That he loves her, he loves her, he loves her. Rosemary smiles and says she does not know if she is in love. She is only eleven years old. Gabe tells her he is ten and he knows already. Rosemary takes him to the floor to dance and they dance - one of the most romantic things you'd ever see on screen.

To his credit Gabe also knows that Rosemary will move on and that he might not see her again. And he also knows that it will never be the same again - she will always be the first. When he goes home he finds his father saying some unsaid things and that evening the three of them go for a meal in a restaurant at the corner. Don't pile up the unsaid things, say em.

Whoa! What a movie. I love it. Watch it again. Of course!
Posted by Harimohan at 9:43 PM