October 24, 2014, Aihole
The erudite guide I met at the Mayura Chalukya told me that the right way to see these three places is to go in the order of Aihole, Pattadakal and then Badami. I went in the reverse (which is how I realise I do many things). So from Pattadakal (pleasant experience) towards Aihole we drove through small village roads that opened up into a beautiful countryside with small hills and lovely green fields as far as the eye could see. The sun was shining, the birds were surely chirping and we were on time. Enter Aihole, 11 kms away from Pattadakal.
I saw one sign that showed some old historic monuments. ASI or something. Aihole. If you are a serious visitor, you could walk all over Aihole and find stuff to do for a week, history lies all around you in bits and pieces. If you are someone like me who is on a mission to spend exactly half an hour, click pictures and generally tick the item off, this central place is the one to go to. Half an hour then. Look at the watch, park car, alert co passengers and go.
But what was interesting was that almost all these places were open i.e. people had built houses close by and were living next to them or almost in them.
I passed by many such, which were suffering from drain water, overgrown weeds, neglect and then came by to the one walled, protected site, the main one in

The guides were rather meek. I might have hired one even for my 20 minutes. But this entire group of temples lies in a couple of acres. Now let me refer to the brochure and get more precise and technical.

The town, a bustling commercial centre during Chalukyan times, stands on the banks of Malaprabha river (remember Ghataprabha river of Pattadakal!). It was the Chalukyan capital before they shifted to Badami. The rich trade and flourishing businessmen aided building of several temples - in all Aihole has 125 temples of all sizes. All architects consider this a place to visit and it is called one of the cradles of architecture. (In fact my motivation to see these places was my niece Pooja who was keen to see these three places.)
Why is it called Aihole? Myth says Parashurama avenged his father's murder and washed his axe and hands in the Malaprabha, turning the water red (Ai Holi!). Another version is that saint Agasthya killed demon Ilvala and hence it came to be called Ilvalapura (logically it should have been called Agastyapura right?).
Aihole has stone tombs belonging to the pre-historic era, stuff belonging to the pre-Chalukyan era. Some of the temples here were constructed during Rashtrakuta and Kalyana Chalukyan times. Over all there was much temple building activity in those days which was a sign of prosperity it looks like. There is an inscription  of the 1169-70 period which states that Aihole was an Agrahara of 500 great citizens (Mahajanas). I don't think we can leave any such inscription in any of our cities now. 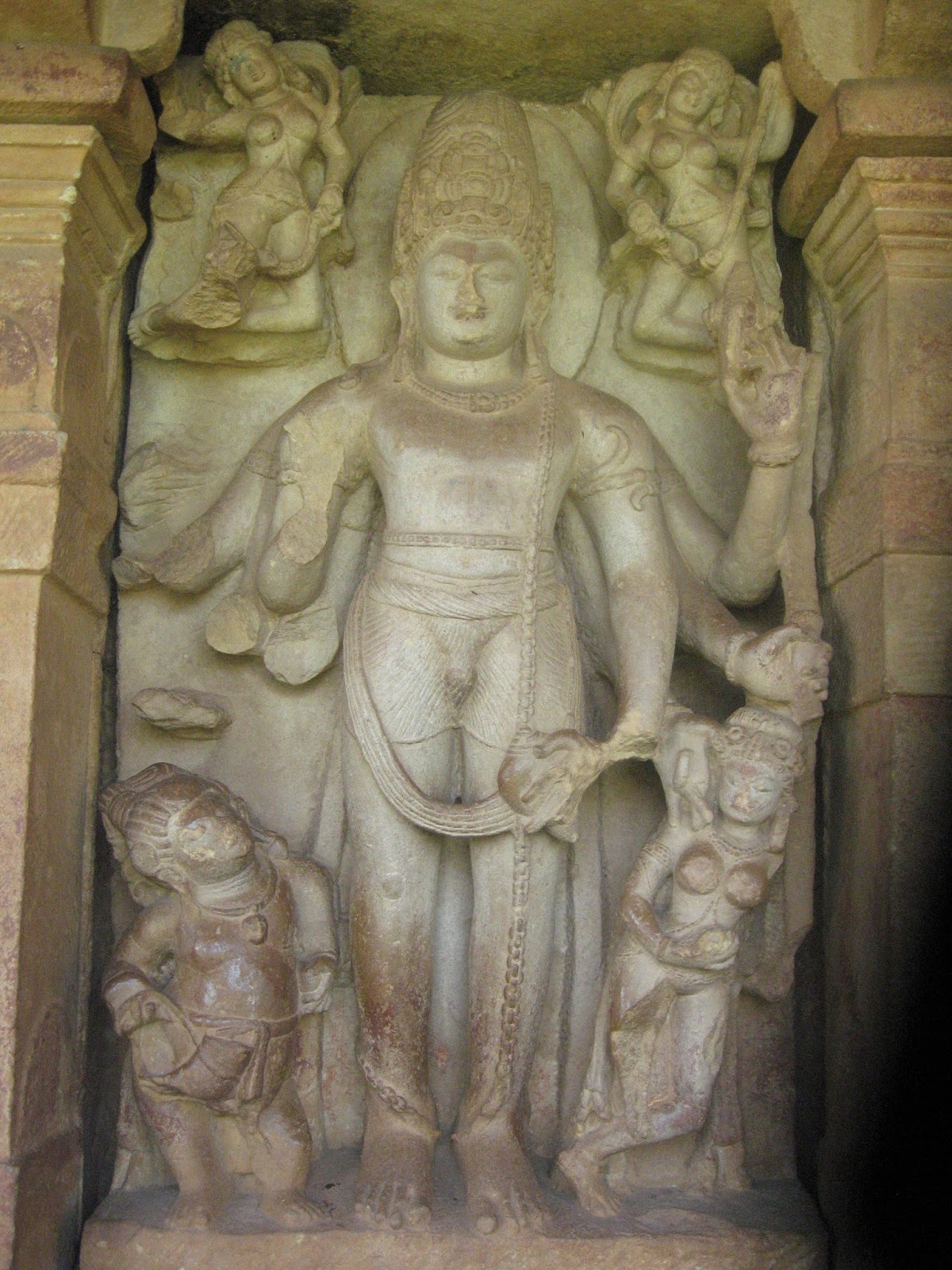 If you look at the brochure its quite clear that Aihole needs much time and patience. The temples and sculptures have a detailing and finish that is quite different from other temples. There are many temples here, which are arranged in groups. The Tryambakeshwara group (12th century AD), the Konthi temple group (750 AD) which has four temples, Jain Basadis (11th century AD), the Galaganatha group (8th century AD), the Durga temple, Meguti temple (634-635 AD) which has an inscription that refers to Mahakvi Kalidasa and Bharavi, the Chikkigudi group, Ravalaphadi temple and Buddhist Chaityalaya.
Someone told me that the Parliament house design is inspired by the Durga temple architecture. There are similarities of course.
We walked around the Durga temple complex, all in 30 minutes and headed out. There was a man selling goli soda which was a relief. Never had one in a long time. Then there was the ubiquitous guavas which were picked up. It was 1135 when we started from Aihole.

9 kms to Aminagad on the Bagalkot highway and then 30 more to Bagalkot. Onwards to Belgaum and then Amboli for a halt. I stopped at Aminagad and we picked up some Kardant sweet. At Bagalkot I filled in fuel and we picked up many more chikoos and guavas. The road between Bagalkot and Belgaum is a dream (but everyone drives very carefully here - there are cops with a speed gun who fine anyone going over the speed limit of 60 kmph. Luckily the cops were missing and I sped past blissfully unaware. Entered Belgaum at 4 and stopped at the inviting Hotel Sankam which is right on the edge of the Bangalore-Mumbai highway. This is a great place to stop. Fellow serves some fine biryani. Amboli is another 62 kms in the ghats.
It started raining heavily. The road was not too good either. It took me around two hours to cover the 62 kms. At 6 pm we checked into JRD International on the Belgaum - Goa highway. Its a fine property on the highway, swimming pool, space, cottages, rooms. But obviously it has seen better days. Met Milind and Neelima, and settled down into the chai, food, eat, drink routine. Tomorrow we start for Goa. Its raining heavily.

Anjali watched cartoons late into the night. That's the best part of the holidays she says. I am happy I did the Badami, Pattadakal and Aihole bit. Wonderful stuff.
Posted by Harimohan at 12:20 PM