I hold Christopher Nolan in high regard for the simple reasons that he seems to convince people to finance the most outlandish and difficult to grasp stories. I cannot conceive how anyone can try and make an entertaining film about the search for new planets to sustain human life - which is not as simple as that because you need to go to the black holes through worm holes and stuff like that. Which is all very good for Nolan and his team of physicists but the rest of us have to detach like parts of his spacecraft at various stages in the movie because it all gets too much to process or understand without the help of a full time robot dedicated to the cause of explaining it all. I detached at a late stage and stopped asking questions. (Why was the new planet folded?) 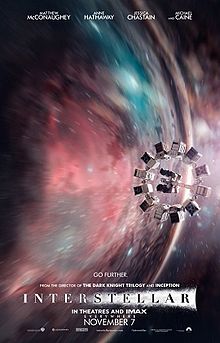 The story as I understood it. In some time not too far away, the world is about to come to an end. (When will we end these movies? Please!) There are no resources except lots of corn so people are eating large quantities of corn (and dust too because its pretty dusty all the time). Ex NASA pilots are now full fledged farmers because food is the biggest problem. Due to some gravitational disturbances in their house, NASA pilot turned farmer and his precocious daughter (who has now set a new cinematic landmark with her landmark words - Dad, you son of a bitch) discover the coordinates of a secret NASA team which has two plans. They are called Plan A and Plan B.

In Plan A the scientists will send the farmer (pilot) to space to get samples back to the earth so we can all move there (and eat what? At least we have corn here.) In Plan B, they stay there are grow colonies of humans (they are carrying many embryos with them) on three planets which have been discovered and already inhabited by some intrepid members of this secret mission. Okay, farmer, here's your chance to save your daughter's world. I mean save our world. (I hate this term. I hate these movies.)

Out in space there is fun and laughter. Soon we find that they are running out of fuel (why don't they carry some extra fuel?). They are also at a place where the theory of relativity comes into play - due to the high gravitational pull, one hour on that planet equals seven years of our lives. Anyway that planet is not good for anything except getting one crew member bumped off (why he is strolling about outside I could not understand).

Off we go back to station where we find another crew member sufficiently aged - they have returned after 23 years. (Sadly for him, these two look fresh as daisies.) Now comes the love angle. Prof, Brand (Anne Hathaway) has feelings for a man who is now the emperor of Planet Edmunds (his name is Edmunds and he is one of the few people who have been sent by the NASA for solitary punishment). So now they decide to go the other way (jealous guys). There they meet Dr. Mann, a person who is not of sane mind, and there is a great fight of two NASA chappies fighting on planet Mann. The moral of the story - nothing ever really changes pal. Put two humans together and there will be war.

Anyways to cut a long story short (ha, I can do it here), Mann is eliminated, the shuttle docked, Brand sent to Edmunds, farmer and robot sent into black hole to pick up data etc. You know, regular stuff you'd understand if you learned your physics well. Unfortunately most of us have not which is why we end up watching films like this. Somehow farmer lands up in his house in a five dimensional reality. I know I am being lazy here but I don't want to understand that bit really - its nice to look at etc and that is fine by me. After some time everyone figures out how to get everyone back into some kind of a reality. By this time I have detached my boat my friend and am happily paddling away in my own reality.

Our farmer Cooper finds he is pretty young compared to his daughter who has grown pretty old. He is sent off to find his love (she is not really his love) Prof. Brand who is sitting all by herself on Planet Edmunds. But that's another story.

(My question is this. If 'they' - the mysterious intelligence can help us humans by gravitational patterns, worm holes, likely habitats etc, its a good chance they'd see that we get there too somehow. Probably in a nice large and comfortable bus. So maybe we could have chilled a bit instead of dashing across the stars based on Plan A and B.)

I liked Gravity better. I am not going to jump up and watch Nolan's films like they are going out of fashion next time. Next time I will wait and watch carefully before I go. Really carefully. Very very. But don't let me stop you, watch it. Else you will be the only person on this world who has not seen Interstellar. So watch it. But if you want to understand it, prepare a bit. Prepare.
Posted by Harimohan at 10:31 PM

Hi Sir,
Didn't see Interstellar as yet will do soon... more excited/curious to see it after your post.

Have you seen Boyhood? (if you could please do review it if you have).

Thanks Hmmm. Don't take me too seriously. Watch Interstellar. Nolan is about pushing the envelope and that's something we could all do with a bit of.
Boyhood, I haven't watched. I shall most certainly see it and review it. I am enjoying this phase when I am a bit more flippant with myself.
Thanks for writing in.