Another Woody Allen flick. Starts gently enough with a successful ophthalmologist being felicitated by the community. The perfect life, the perfect family. Back at home he discovers a letter addressed to his wife. He realises it is from the one misdemeanour in his life, a young lover he picked up, an obsessive sorts who wants him to break their news to his wife and marry her. He is wracked by guilt, being of a religious bent of mind. 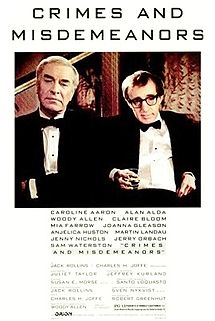 An alternate track is that of Woody Allen, an unsuccessful documentary maker who lives in his own world. He does not seem to like successful people (his own brother in law being one of them), is happy taking his niece to the movies (does nto appear to have fully grown up), and his marriage is on the rocks (no sex for a year). But his brother in law gives him a great chance thanks to a recommendation from his (Woody's) wife, to shoot a documentary on who else - the brother in law and his life. Woody meets a beautiful, single woman on the shoot and they hit it off. Both seem to hate the brother in law who they think is too pompous and full of hot air and no content.

Meanwhile ophthalmologist meets his bad brother who offers his advise - bump the other woman off quietly. After some thought and a bit of pushing from the obsessive woman who lands up near his house on his birthday, the eye doctor orders the hit. The woman is history. Eye doctor is now plagued with guilt and wants to confess. His brother tells him to hold his nerve. It will blow over.

Meanwhile Woody's marriage is over. His brother in law fires him for showing him in bad light. His girlfriend tells him she is off to Paris. At a party four months later, we find the ophthalmologist enjoying his life and telling Woody of this great story of the perfect murder, the girlfriend is now engaged to the brother in law, One wonders if there is any cinematic justice. But one has to live with guilt, with the knowledge of one's own flaws.

Woody's performance is brilliant. I loved the way he shows his resentment towards his brother in law and the way he laughs at him when he is showing his the documentary. He is really funny. The story reminded me a bit of Matchpoint where the killer goes away scot free. But life's like that - it gets back in various ways - not just jail.