Just got the 'Winnie the Pooh' DVD from Landmark and discovered as quickly that it has a region issue again! How and why are they selling these non-region DVDs in this region? And why is it that I keep buying them? Anyway I was so happy at finding the DVD that I did not even ask the guys at Landmark about the region - something I always do these days. But seeing the disappointment on Anjali's face (and in my heart) when it did not read it at my player, I decided to try the PC and voila - it played. And what a wonderful movie it was! 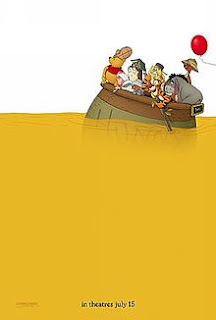 It starts out with Pooh and the other stuffed toys living in the Hundred Acre wood with their good friend, the young lad Christopher Robin. Pooh wakes up late, finds that his tummy is rumbling and needs honey. In his search for honey he runs into all his friends Eeyore the lazy and gloomy donkey, Piglet the fearful and easily frightened piglet, the warm and affectionate kangaroo Kanga and her little one Roo, the over energetic tiger Tigger and the over smart owl Owl. Pooh discovers that Eeyore has lost his tail and the information goes out. Christopher Robin announces a reward for anyone who finds a suitable replacement for Eeyore's tail - a pot of honey. Pooh helpfully offers a clock - which falls off. Kanga offers a scarf - which unravels.

Meanwhile Pooh goes to meet Christopher Robin for some honey and finds a note. "It's a good thing we I noticed it, else I would never have foound it!' he says. 'Gone out, Bisy, Bak son' writes Christopher Robin, which Pooh cannot read but enlists Owl to read. Owl sees a conspiracy "Robin has been captured by someone called Backson," he declares. To make it worse he describes that he has seen this Backson and he is a scary and dangerous fellow. The animals get ready to free Christopher Robin from Backson the fearsome. None who is more enthused by the idea than the over energetic Tigger, who also recruits Eeyore to be Tigger 2 in their quest to capture Backson. Eeyore gets scared with all the pouncing and trouncing that Tigger subjects him to and hides in the pond. All the animals plan to dig a hole, lead Backson to the hole with stuff he may life, and trap him in that.

But a delirious from hunger Pooh falls into the hole. To rescue him they try to use an anchor that Eeyore brings from the pond and soon they all are at the bottom of the pond thanks to some bad planning by rabbit. Only piglet is left up there and he has to save them. A frightened Piglet (Oh let me get some help...oh dear, I am the help!) runs into Tigger who is still prancing around in his Backson getup and flies off hanging on to B'loon. The B'loon crashes into the letters in the book which all fall into the hole. The animals use the letter ladder and climb back up. Rabbit gives B'loon a pot of honey for helping them out making Pooh sadder and hungrier. Meanwhile Christopher Robin steps out, back from wherever he went and tells them that he has gone out and was back soon! The animals look at Owl the culprit who had made up the story of Backson in his over smart ways and Owl flies away a trifle ashamed.

A famished Pooh goes to meet Owl for some honey and realises that the bell rope seems familiar. Owl tells him he found the rope near a thistle bush. Pooh tells Owl that it is Eeyore's tail and takes it back - despite being hungry and refusing Owl's offer to eat the honey first. Christopher Robin rewards Pooh with a huge pot of honey for finding Eeyore's tail!

Oh, 'Winnie the Pooh' was wonderful and incredibly clever. I loved watching all the characters - Tigger and his over energetic prancing, Owl and his over smart responses, Pooh and Piglet, the perpetually gloomy Eeyore. Wonderful, wonderful stuff and one could watch it again and again. If ever you get a chance to see it do - its simple, wonderfully funny and like nothing you'd ever see. You could just pack up all those characters and keep them with you - they are so loveable!
Posted by Harimohan at 4:19 PM