'The Book of Five Rings' (Research Press, Rs. 150), a classic in war strategy, was written in 1645 by a Japanese samurai warrior Miyamoto Musashi. The samurai warrior wrote of his experiences in combat and expertise in kenjutsu (the art of the sword). In this book Leo Gough, an author of 20 books on management subjects has written his interpretations of the original. 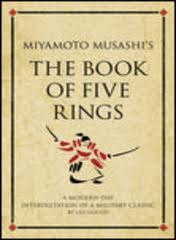 There are 52 ideas or strategies of Musashi that are interpreted by Gough for the reader with a small exercise to do at the end of the page. 'Go to the capital' says the first idea, urging one to go to the pace where the action is if one wants to go to the top of one's profession. I really liked this. On the aspect of preparation he emphasizes the need to 'Be honest with yourself', 'Keep on learning' and 'Don't waste time' - all very relevant and basic to the preparation. He talks of having strategies but also to be 'Be adaptable (like water)'.

While preparing he talks of 'Remembering the basic aims and objectives' of battle which is to win. Also in learning to 'Prepare to fight with a disadvantage' or in compromised situations. There is emphasis on 'visualization' of how you would want the battle to end.

In attack he says 'Don't be predictable' and don't get stuck with favourite weapons and strategies. Before attacking he says it is best to 'Be in higher places' to get an advantage over the enemy. He asks one to 'Think like the enemy' and think through every detail as in 'Think forest, think trees - both'. He emphasizes on 'Research' and on 'Paying attention to what appear to be seemingly trifles'.

In the fight he says 'timing of the attack' is most important. You can 'Control the mood and agenda' by your demeanour. In action there is no further thinking - 'Act, when you perceive the time is right' and 'When the enemy is collapsing, finish him off' and 'to attack by overwhelming' wherever possible. In the battle he says 'Be fully aware'. One should 'Push the enemy to show his hand' and also realise that 'Few can beat many'. On leadership he says ''Allot work according to ability'. And he finally finishes off with the 'Importance of mastering one's skill by tough training' to achieve miracles. I completely, completely agree with Musashi's philosophy as it is the state of a mind of a warrior who is always facing death.

The book makes a lot of sense and is made relevant by Leo Gough's interpretations to the modern world. The little exercises at the end are good and could help anyone who is serious about preparing to master any craft or to achieve a clear goal. For sportsmen specially, captains of sides and even for leaders who have applied some thought to their roles, this book could be invaluable. It is easy to read as each idea spans over two pages but the exercises would certainly take time.
Posted by Harimohan at 12:41 PM