How to Create Work

We have a nice road laid out in our small colony. There is nothing to complain and we are all having a good time. The roads are smooth, no potholes, no digging etc. There are only about 70 plots here so even less bother.

Step 1: Then one day a bunch of workers descended with their tools and implements. They spread themselves all around the colony and started pulling out the kerbstones. Most of us wondered why. I asked the worker and he simply shrugged and said he was asked to do that. In a couple of days all kerbstones in the colony were pulled out including the one outside my house. I wondered apprehensively where it was all leading to. 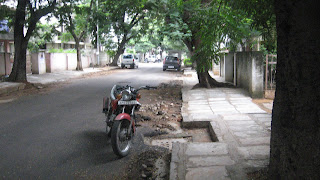 Step 2: Then the workers started pulled off the tiles on the pavement and stacking them up. I wondered what on earth was going on. The tiles were in perfect shape. Was there a move to remove all pavements in the colony? Were they having different pavements here? Why?

Step 3: Then came the first sign of what was coming. Some of the pavements were reduced by half a foot. A small road widening if you please. I wondered why. How would that half a foot or one foot help anyone? Why was such a big project being undertaken for this and so many people inconvenienced?

Now all pavements were not reduced. Only a few. 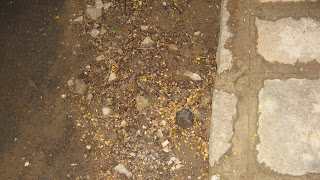 Step 4: The lorries came and they shovelled in the extra mud from the reduced pavements.

Step 5: The next bunch of workers came and started putting the tiles back and cementing them. While pulling out the tiles they also damaged some driveways, including mine, so they very kindly put some extra tiles and rebuilt my driveway.

Step 6: After tiles were in place, the kerbstones were put carefully back in place. All the debris of this entire operation was left for the lorry gang to take away. They went missing for some days, perhaps attending some bandh of sorts and then, they came and took it away.

Step 7: The last few days a new gang comes here. They ask for water to water the drains that have now been formed by the new half foot extension.

The process is still on. 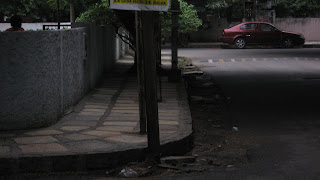 There is absolutely no difference to what the road was earlier. There is no benefit, no convenience that this entire project served. The road is just as wide, the tiles are now cemented. The whole project lasted two months with several workers involved. I am sure a project worth a few lakhs. Even if that they were planning to build drains by the roadside it might not have been a great idea - the roads automatically slope off to the drains and the rains are over anyway.

I read somewhere how corruption works in India. You pay a man to dig a hole at night. Then you pay another man to fill up the hole the next morning. No work is done but two men are paid their salaries. And when we talk of inflated salaries then the whole thing becomes even more interesting. Most times both men are the same - which means that he will soon realise that he does not need to dig and fill the hole - all he needs is to make bills and get the money cleared for both projects. Reminds you of the movie 'Well done Abba' where Boman Irani files a complaint for a missing 'well' that exists in records but not in real space.

So much has been done on paper. Roads, dams, houses, subsidies, electrification, education, medical help, drought relief, famine relief - on paper.
Posted by Harimohan at 4:25 PM

I used to worry about how this universe came about. If God created it, now who created God. I wanted an answer or I wanted my question to go away from my mind. After a while the question cleared my mind and I don't worry.

If you feel helpless over anything, pray for the questions to go away.

That's one solution certainly. We don't have to worry about all the things that go around us - only things that really concern us. It should save us a tremendous amount of energy. Thanks KRCUBE.