'The Deer Hunter', released in 1978, is ranked 53 in the AFI's top 100 movies. It is an unusual movie and made so lovingly and carefully that I wondered if it was an autobiographical account. A bit like reading 'The Godfather' when you wonder if Mario Puzo was actually there witnessing it all! A movie that has a power packed star cast including Robert De Niro, Christopher Walken and Meryl Streep and a huge story set in the backdrop of the Vietnam war. 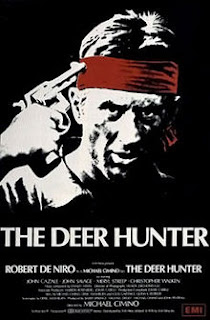 The movie begins in a small town in America where young Ukranian immigrants Micael (Robert De Niro), Nick (Walken), Stevie and a few days from joining the US army in Vietnam. Stevie is planning to get married before he leaves for the war, while Nick proposes to his sweetheart Linda (Meryl Streep) and plans to marry if he returns. Michael admires Linda but says nothing as he knows Nick and she are in love. The three friends have another three friends John, Stan and Axel, and they have a fine time drinking in the pub, racing cars, doing things that young men do. Also they go deer hunting, something that Michael is an expert at, and its a regular boys on the road trip, so much more fun than a 'Zindagi na milegi dobara'.

Michael takes deer hunting seriously and prefers Nick's company on his expeditions. He believes that he must take out the deer in one shot - that is the mark of an expert deer hunter and more often than not does it. The wedding celebrations are shown long and happy, shows the drunken boys and their complete ignorance of what they are headed for. The scene in the bar with the 'fuck it' army officer is brilliant. After a long drawn out drunken and carefree revelry after the marriage, when a drunken Nick tells Michael not to leave him in Vietnam if something happens to him, we are transported in one moment to the horror of war, so sudden that it shocks you.

Napalm, fire bombs, civilians hiding under pits bombed by North Vietnamese and Nick, Michael and Stevie held hostage by North Vietnamese soldiers who make their prisoners play Russian roulette for their pastime. The soldiers bet on who will win, throw the dead bodies away and throw the ones who are chicken into a pit full of rats. It's a no win situation but the deer hunter conjures an escape along with Nick and the three friends escape by the river where Nick is rescued by a US copter. Stevie falls of the copter and Michael also lets go to save him. Stevie breaks both legs in the fall. Nick recovers in hospital but thinks the other two are dead. On his recovery he stumbles into a Russian roulette joint in Saigon where he is egged on by a Frenchman to try his hand, Micheal sees Nick there, but cannot make contact.

Back in the US, war veteran Michael is a changed man, does not like parties, human contact and prefers staying in a motel He meets Linda, finds that Stevie is back with his legs amputated and that he does not want to come back home and prefers the War Veteran Hospital. Nick is AWOL. Michael goes back to Saigon to find Nick, finds him, full of drugs, playing Russian roulette everyday and surviving, the 'famous American'. Nick does not recognise Michael initially and only faintly recognises him when Michael sits opposite him in the Russian roulette table, trying to remind him of what they went through. In the last shot Nick remembers the deer hunting days and says 'One shot' pulls the triggers and dies - his famous luck running out. Back in the US the friends gather for a solemn grieving after Nick's funeral.

'The Deer Hunter' is a powerful statement against war, comparing the Vietnam war to a game of Russian roulette. Brilliant screenplay, fantastic performances and a movie that keeps you riveted as it courses through the story as if it has a life of its own. I still find it hard to believe that these are fictional characters. A must watch.
Posted by Harimohan at 8:42 AM