This was my first real visit to Hubli in terms of having the time to explore the place. The last time I visited the place, a couple of years ago, I was highly impressed by the old heritage buildings of Hubli which look wonderful, and the many new buildings that were coming up alongside. There are several schools that are over a 100 years old, several houses and institutions that appear to be of that vintage as well. As we drove round the city with my good friend Sunil Jyoti showing me some of the old houses and the new ones beside them, I realized that this seemingly small town has had a large history. In the new houses there was an unmistakable attitude that I found was so different from that of Hyderabad or even Pune or Mumbai – the Hublikars sacrificed function for style and that said a lot about these people. The architecture was of high sloping roofs, extravagant flourishes, large curves – that no Hyderabadi would ever dare have. Here, every square inch is designed for function, for rent. The Hublikars houses, even small ones did not bother about the rent aspect, only style. Maybe I could have understood that better if I knew their history better. (The pic of the old building is one I took a few years ago.) 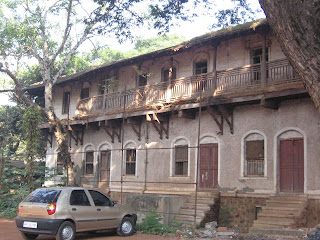 But when you think of style you can only gaze at the age old schools and institutions – I saw at least six or seven of them. The 100 plus year old liquor store, Pintos, is one such institution. I actually got talking to Mohan Pinto of the current generation but there just was not enough time – maybe later, more on Pintos. There are many more British built grounds, offices, bungalows, houses. Even the Railway station in its current avatar (which is soon going to be replaced by a modern structure) reminds you of colonial times (in a nice way). Hubli is now called Hubballi of course and is the exact mid-point between Pune and Bengaluru on what is one of the finest highways in the country. Hubli (apparently means ‘flowering creeper’ and its sister town Dharwad, took me back a few decades as they retain their old world charm. Dharwad more so. The weather if fantastic, it is close to Goa and Karwar, the people are friendly and happy, there are many educational institutes - Hubli is a good town to be in.

Hubli has a large Maharashtrian, Kannadiga, Jain and Muslim population. One look at its history and you know why. Hubli’s history goes back as far as the Vijayanagara empire. The old Hubli of those times has the Bhavani Shankara temple that still exists and the Jaina basti. There has been a constant tussle to gain control of Hubli between the Marathas and the Mughals and the city kept changing hands. In the beginning there were the Adil Shahis who conquered it. That was the time the British opened a factory in Hubli. Chatrapathi Shivaji, the Maratha king, looted the fatory in 1673. The Mughals then conquered Hubli. In 1755-76 the Marathas again regained Hubli from the Mughals. They lost Hubli to Haider Ali but again in 1790, they regained Hubli. In 1817, the British took over old Hubli and new Hubli, which were ruled by separate Maratha rulers. With so many wars and conquests, the town obviously has a spirit of the warriors. Not for it the approach of function and saving, it is for guts and glory! The Railway workshop of Hubli is of 1880 vintage (which I glimpsed at on the drive). Quite some history that! 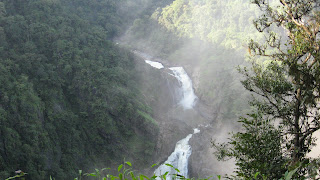 From Hubli, we headed to Mundgod, the Tibetan settlement which I already wrote of before. From Mundgod, we then proceeded on the Karwar route to Magod water falls. Now this road is in fantastic shape and you pass by many interesting towns on the way, timber plantations, lakes and so on. The distance is about 70 kms or so from Hubli. The drive goes off into a smaller road that travels through scenic forests of the Yellapur area and finally stops at the Magod falls. We were in for surprisingly good weather, almost no visitors that day. The place also has a government rest house which looked like a wonderful option to stay. The waterfall drops abou 650 feet, has a fine view, was not at its fiery best when we went, but had enough to make the journey worth its while. 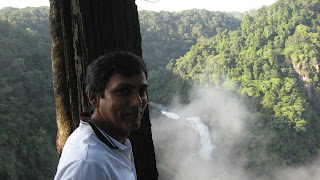 The next day we drove to Dharwad, Sunil, Anjali and I. It was wonderful as we drove around in the twilight time and enjoyed the greenery and the fine roads. One thing that impressed me on the Hubli-Dharwad road (and on other highways connecting Hubli) the traffic police actually enforce the speed limits – we travelled at a staid 40-50 kmph as the cops stood by menacingly with their speed guns. This is the first I have seen this being enforced in India. Normally at places where there is a 40 kmph in India, it is normal to see drivers do 80 kmph or even 120 kmph! On the highway, more so. Most times the signs seem ridiculous as people just whizz past but a fine of 300 bucks will have everyone taking their foot off the gas!
We passed by the famous Unkal lake saw the Chaturlinga temple from a distance, went past the Iskcon temple, past the many fine eateries on the way including the good looking Travel Inn, the impressive Karnataka University campus at Dharwad, the old world buildings and then headed back to Hubli. 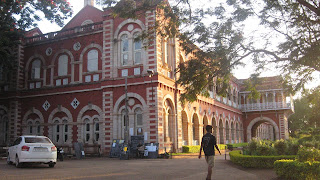 On the same evening we visited Nrupatunga Betta, a hill top with wonderful views of the city. It is a fine place to walk, to just sit and admire the beauty around. We ate a lovely snack called ‘girmit’ made of puffed rice and some simple additives to that. Fine thing this girmit! Never ate it before and highly recommend it, especially in a little joint on the base of the Nrupatunga betta climb. Of course Dharwad is famous for its pedha, which we secured to distribute among the friends back home.

There are many places of interest within Hubli that I missed this visit as I came to know in my post-visit research. There are two famous maths - Moorusavira Matha and the Sidharoodha math. The Bhavanishankar temple in old Hubli is ancient and is worth visiting I am sure, and the Chandramouleshwara or Chaturlinga temple in Unakal that belongs to Chalukyan times is another. The Shambhu Linga temple of Chalukyan times in Kundgol is another that I missed. Within the city there is the Indira Gandhi Glass House Garden which we passed several times but never stopped at. It does need some more time to see these places I guess. I really wanted to visit the Gangubai Hangal institute to see if they had any museum of sorts there. But there will be many more visits to Hubli hopefully and I will go and visit those places the next time.
Posted by Harimohan at 5:10 PM

Nargund is a place close to Hubli-Dharwad. So now you know where the style comes from.

Raja, I completely failed to make that connection. Now I understand!