Such a Long Journey - Rohinton Mistry

This was a book I had been meaning to read for a long long time. I made a few visits to the bookstores and found that they were out of stock and finally it was Vinod who got me an old edition of this book by Rohinton Mistry, who is fast turning into one of my favourite authors. I had read his 'A Fine Balance' and loved it - and that leaves 'Family Matters' from his major works. 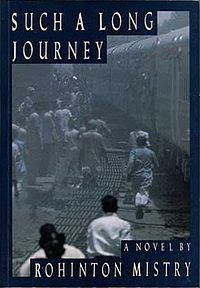 'Such a Long Journey' is Mistry's first novel. It is the story of a Parsi family, more so, of Gustad Noble, aptly named, because of his noble and principled values and beliefs. Gustad and his wife Dilnavaz, his sons Sohrab, who is the family genius who has secured admission to the IIT but wants to do BA instead, Darius, the sportsman and Roshan, the youngest of the siblings a school going girl live in a Parsi apartment called Khodadad building which is filled with many typical inhabitants. Mistry brings Khodadad building and its inhabitants to life in the first few pages and you are transported right into this Parsi community with all its quirks and nuances and fine detailed explanations of their practices.

Gustad is coping with his bank job, in a Parsi bank, his eldest son's rebellion against joining the IIT and the loss of a good friend Bilimoria who suddenly left them without a word. The time in sometime in 1971 when the Bangladesh war is on. Sohrab leaves home after an acrimonious spat with his father. Bilimoria writes to Gustad and asks him to undertake a top secret operation for the RAW for which he is now working - in return for their friendship. Roshan falls sick inexplicably and gets worse. Darius falls for an irritating neighbour's fat girl and the families fight over that. Things are at a low. Gustad agrees to Bilimoria's dangerous request for his friendship.

Bilimoria asks Gustad to take a packet from a source in Chor Bazar. The packet contains ten lakhs and Gustad's job is to deposit it in a fictitious account to fund the East Pakistani rebels. Gustad enlists his good friend, the funny man, Dinshaw from the bank to do the job. Patriotic Dinshaw thinks it is for the Mukti Bahini rebels in Bangladesh and takes up the hazardous job. Midway through the mission they find that Bilimoria has been arrested for corruption. His contact in Mumbai threatens Gustad to withdraw the money and return it to him. Gustad and Dinshaw start withdrawing rapidly to save their lives. Dilnavaz meanwhile falls for the stories of her cranky neighbour and starts following some weird practices to set Sohrab right and to help Roshan recover soon. Roshan seems to be slipping away.

Things slowly fall in place but they take a heavy toll. Dinshaw, Gustand's friend dies of his cancer, and Gustad thinks maybe he hastened his death by asking him to stop laughing and flirting with their new typist as it endangered their mission. Their friendship is shown tenderly and I loved the way it developed. Then Bilimoria gets word to Gustad to meet him in Delhi. Gustad finds Bilimoria in bad shape, being given injections, but Bilimoria tells him that he had found that the Prime minister Indira Gandhi had been rerouting the funds supposed to go to Mukto Bahini for her private Swiss accounts. He says he has been trapped by higher ups. Gustad understands. Soon Bilimoria's death is also announced in the Paris newspaper, and Gustad goes to his friends funeral - a completely different affair where he is the only mourner as opposed to Dinshaw's who had hundreds of mourners. And in the trio of tragedies Tehmul, the retarded man who lives in the apartments and whom Gustad cares for, dies in an unfortunate incident when the ocals fight against the municipal authorities and a stray brick hits him. As the novel draws to a close one sees that journey Gustad Noble has made, his growth and none feels it more than his son Sohrab who understands the man his father is.

Gustad Noble is a wonderful character. And so is Dinshaw, Dr. Paymaster, Paanwala, Tehmul, Malcolm, the double BA street painter who has studied world religions. the book hovers on the immensely tragic and lurches back to retain some sanity finally, just as it did in 'A Fine Balance'. Mistry paints a detailed picture of the Parsi community in the 1970s, its practices, its thoughts and fears, its eccentricities, rituals and so on. For that itself this book is a fabulous read. But much more than that, the book drew me in within 2-3 pages and held that pace all through as one wonders what will happen to Gustad Noble and his family.

To show all this in the backdrop of the West Pakistani aggression on the then East Pakistan which is now Bangladesh, to bring in the Mukti Bahini, the Prime Minister Indira Gandhi, the systematic killing of what they is something between 30,000 to 3 lakh East Pakistanis mostly intellectuals, students, Hindus and the influx of 1 lakh refugees across the border as the people escaped the attacks on civilians is wonderful stuff. This is where Mistry is so good, in bringing in a major socio political event that would otherwise have been brushed under the carpet into the intricate plot of a well-told story. One cannot read his book without tying to understand what went on in East Pakistan nor can one read 'A Fine Balance' without trying to know more about the Emergency. His is blatantly open in bringing the Congress and its leaders, notably Indira Gandhi and Sanjay Gandhi under the scannner. Much unlike Rushdie who for his vague character the 'Widow' in midnight's Children, one that resembled Indira Gandhi, had to have the book banned by the lady.

In one or two utterances against the Marathi manoos movement which was threatening non-Marathi populations in those days, Mistry's delightful characters deride the Shiv Sena. One or two phrases if I recall. And for that, the scion of the Thackeray family Aditya Thackeray protested and got this book banned from the Mumbai Universities syllabus for being disrespectful to the Shiv Sena. Aditya Thackeray sure has a misplaced sense of grandeur if he thinks the book is anything about the Shiv Sena. It is not - and whatever is said was a character's opinion and perhaps in reality, that of many more. But the Vice Chancellor's act of taking this young man's requests seriously and banning this wonderful book from the Mumbai University syllabus was another gem in our Indian life. We are so much like the frogs in the well as they say. We cannot really ever progress if we keep pulling ourselves down at this rate. By banning the book the Shiv Sena has not only closed an opportunity for the students to view Mumbai from such a wonderful perspective, to understand our history a bit more.

Mistry's first novel is wonderful to read and you find Gustad and his life completely enveloping you. You are part of their house, the water filling, the black papers on the windows, Sohrab's bed, Gustad's grandad's furniture, his plants, the black wall with the images of Gods. It may eventually wear off or it may sink into the bones as books do, but Gustad Noble will always remain and one will be looking for him when one visits Mumbai - the tall, well built, principled man with a slight limp in one hip. Well done Rohinton Mistry, you have done more to bring the Parsi community and events of national importance that not many would dare to address.
Posted by Harimohan at 8:52 PM