'Glengarry Glen Ross' has a fantastic star cast - Al Pacino, Jack Lemmon, Ed Harris, Kevin Spacey and Alec Baldwin to start with. It is based on a play written by the screenplay writer of the movie and is full of hard hitting dialogue and a deep insight into the lives of salesmen. Not for the weak hearted as it has tonnes of profanity flying about. 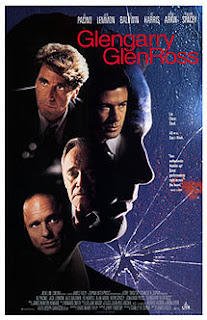 The story is about a real estate office managed by Williamson, played by Kevin Spacey. His team consists of four salesmen - Al Pacino as Ricky Roma (the star salesman), Jack Lemmon as Shelley (fading star salesman, old and not performing), Ed Harris as Moss (resentful, work shirker) and Alan Arkin as Aaronow (nervous and low in confidence). Their office is not doing too well and they get a man from the head office to motivate them. Alec Baldwin is their motivator and he tells them in few words filled with the worst maa behen gaalis what he thinks of them and that the top guy gets a car and the bottom guys get the boot. He is abusive, gets under their skin and leaves them all disturbed at the prospect of losing their jobs. Roma misses the meeting.

Shelley tries to bribe Williamson for leads, Moss and George crib about the system and decide to steal the hot Glengarry leads which are only for 'closers' while Roma is selling real estate to the most unlikely guy he meets in the bar. One can see the range of attitudes as they all go through the night, getting under each others skin. In the morning they find that the office has been burgled.

Moss leaves after an acrimonious interview with the cops and a fight with Roma, same with George who shouts at everyone but does nothing, Shelley has just come back from a big closing in a dead lead and Roma has converted his casual acquaintance into a sale. Roma now wants his car, Shelley is on cloud nine and they take off on Williamson the office manager. Shelley and Roma also manage to con Roma's new client but Williamson slips up and lets the customer know of the gag and that leaves both the salesman furious. In his angry and overconfident outburst Shelley however slips up and lets Williamson know that he was there in the office last night. His pleas fall on deaf ears and he is apprehended by the police for the robbery.

Lemmon is absolutely brilliant as usual, Pacino is brilliant, Baldwin is brilliant, Harris is brilliant - in fact the casting is so perfect and the screenplay so tight that you don't want to miss a word. Hard hitting, unsympathetic and a good insight into the real world 'Glengarry Glen Ross' is a fine watch for anyone looking for a stressfulsales job. Of course if you are not one for bad language, this is not for you.
Posted by Harimohan at 4:07 PM