In the late 80s when I had joined All Saints High School after moving back to Hyderabad, my favorite pastime was watching the cricket team practice in our small ground. It looked so good, cricket in whites, in full kit, on a mat and I could spend hours watching the senior school boys play, hearing the sound of leather on willow. In those years we heard the names of our stars, our seniors, and looked at them or whispered when we passed them in the corridors - Milton Balm was a big hero for his big shots, his rugged handsome Anglo Indian looks and the many fables woven around his cricketing exploits. And then there was talk of one Azharuddin, a stylish player who had an air of mystery around him. Frankly, I only heard of Azhar and never saw him closely in those years. We spent many hours gazing at the pictures of our cricket teams in our corridors and dreaming of their heroics and the championships they won.

When I played for All Saints in my last year at school, Azhar's younger brother Iftekhar was my team mate and one who helped me patiently make the grade to playing cricket on the league stage. I was hopelessly raw, even had trouble getting my guard strung up right (complicated pieces of work then, until the slip ons came) figuring out how to get the pads right, what supporters were, which bats to use etc. Ifti was a fine teacher and a great supportive teammate. Azhar's other brother Baleeg was our contemporary though he studied in another school. Both Ifti and Baleeg, from that day to this, remain good friends and are amazing examples of well mannered, down to earth, humane gentlemen with extremely good grace. 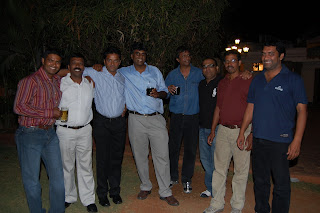 After school I joined MCC and that was when I first played against and bowled to Azhar who played for Nizam College. He was painfully shy in that boisterous Nizam College cricket team full of strong characters including Kiran Kumar Reddy, our Chief Minister now, Pavan Kumar, Waheed, Mohsin, Vivek Jaisimha, Imtiaz, Sunil Phillips and so on. But I remember well that he would speak to us juniors in that shy manner of his, always acknowledging me, who was from All Saints and who played with his younger brothers. He had plenty of time to play the ball and it looked so futile bowling to him and he casually went about getting his runs. We played against one another many more matches and our acquaintance grew. All the three brothers to this day are some of the best examples of humility, of politeness and helpful nature. And all of them were very genuine people.

Azhar passed out of Nizam College and joined SBI. He suddenly shot into the limelight after almost being dropped from the Hyderabad Ranji team. He got a 60 in a do-or-die match for him and never looked back. I remember he got selected for Duleep Trophy and got some runs. At the same time I got a hundred against Nizam College in the Inter collegiate final for Osmania. The first thing Azhar said when he met me was 'Well played Hari' - and I was proud that he had read about my batting exploits, and I wished him on his fifty too which he acknowledged with a smile. We always had short solemn discussions around cricket. And then he got selected for India and got those three hundreds and never looked back. I remember watching him get his first hundred at Calcutta against England on live television at my sister's house in BHEL and that moment was one of pure joy for me - I can never forget the elation at his hundred - as if I got it myself. Azhar was a nice guy and you really wished all nice things on him.

Though he grew bigger and bigger, we bumped into one another here and there. When Hyderabad won the Ranji Trophy and I was part of the team celebrations, he was there congratulating us, we played some All Saints versus other teams matches where he was our captain. When I was in the Ranji probables, he offered me his bowling shoes - in times when spikes were a big thing - I never had the money to buy them otherwise. He asked me to come to his home to pick up a pair of spikes that were big for him which would have been a valuable asset to me, but I was too shy to make the trip and ask. By a quirk of fate I ended up with his track suit and he with mine mostly, when the HCA distributed us track suits on winning the Ranji Trophy.

In 1987, when he came back from Australia and drove to the Osmania University grounds in his white Honda or Audi, I forget which, there was a huge crowd to see hm play for SBI against us. Azhar took me aside in the pavilion and with his arm on my shoulder, spoke for a long time about my career, as my jealous teammates looked on from the window, how I was bowling and threw in a few tips as well. It was a wonderful gesture for someone of his stature to give confidence to a youngster, something which he always did even as a captain. Of course I was over the moon that India's top batting star spent so much time with me. I kick myself now and think I should have asked more questions, learnt more. Functions, marriages, ceremonies, felicitations - I met him here and there. Azhar grew bigger and bigger, went on to great things and his name got dragged into all kinds of controversies. More than two decades passed since those Nizam days.

When my first book 'The Men Within' got published, I called Azhar and invited him. He was in Delhi playing some invitational matches and could not come but he wished me well. Of course Ifti and Baleeg came and celebrated the event with me. Then Azhar became the MP of Moradabad. And then, in a sad incident, his younger son Ayaz passed away recently.

Vidyut, Noel and I, all from All Saints too, went to meet him to offer our condolences. Azhar welcomed us with a warm hug. He was composed of course, very fit, and it was just like picking up the strings from over twenty years ago. We spoke of his politics and he said he was now in politics for the rest of his life. 'It is harder than cricket. You cannot satisfy everyone, how much ever you do. There is so much to do - education, health, hygiene, development, unemployment.' It is obvious he is fully into the problems of his constituents. He talks of the brass plating industry, the unhygienic conditions, the unhealthy food, the lack of facilities in Moradabad. 'I have a website,' he told me. 'Please look at it, it has all the information, Give some suggestions as well.' I said I would. It is a fine website and gives much information - I was impressed. It is worth a look so please do visit http://azhar.co/ to see what Azhar is doing in his second innings.

We spoke for about half an hour. About cricket, politics, general events and then we bade good bye with another warm hug which conveyed the respect and affection we felt for one another, and a promise to keep in touch. I felt the same warm vibes from him and Ifti, who was also there, as I did more than twenty years ago. That is one thing with Azhar, as can be seen from the genuine outpouring of grief and sympathy at his loss. He has always been nice to people, helpful and supportive - never heard anyone say one negative thing about him. As we waited to meet Azhar, Noel David who played with him for India said that Azhar was a huge support when he made his debut. Azhar is simple, speaks from the heart and is almost naive, as he speaks honestly about certain politics and other things. Wish you well Azhar, in all that you do. It has been a journey of ups and downs, of extremes, and you have done very well so far. Wishing you a great innings in politics as well.
Posted by Harimohan at 11:17 AM