Watched an unheard of 2007 movie called 'The Great Debaters' yesterday. It is a film inspired by a 1930 true story of the debating team of Little Wiley College, an all black college in a time when racism was rampant, and how the team rises to challenge the best debating teams in the USA. Starring a heavyweight cast of Denzel Washington who also directed the movie and Forest Whittaker, it is a wonderful movie that keeps you engrossed with a sharp screenplay and fine performances. 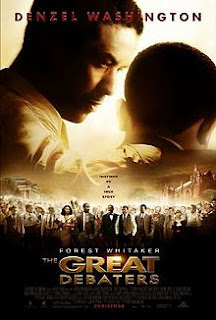 Tolson (Washington) is the debate coach of Little Wiley college and he chooses a four member team that includes a precocious 14 year old James Farmer Jr, a girl Samantha, and two lead debaters Burgess and Lowe. Tolson puts a lot of effort in picking his team and coaching them. He is also actively involved in fighting racism and bringing the collective together by talking of unions among sharecroppers etc - something which does not go down too well with the authorities. The debating team does a wonderful job and soon becomes the leading college in the black colleges. As its reputation spreads the team is invited to debate at common debates along with white colleges. Along the way the team splits, Burgess leaves as he is concerned about Tolson's activities which may harm his career prospects, Farmer and Lowe fall for Samantha, who chooses Lowe's affections. Finally, Little Wiley contests against Harvard, the premier debating team in the US, where Lowe, the captain lets James and Samantha debate, and wins. Interestingly James speaks of Gandhi and the Jalianwala bagh incident in his debate supporting civil disobedience.

I found it riveting stuff. I loved the debates, the background of racism and the danger and circumstances that blacks lived in those days as they struggled to live with dignity, the razor sharp dialogue and the intellectual orientation of James Farmer senior, Tolson and the debating team. In the mould of the 'Dead Poet's Society' and such movies, 'The Great Debaters' is a must watch for some fine performances and racy story telling. Almost everything they talk of could be true of India as well - sadly, the movie was o 1930 and we are talking India as it is today.
Posted by Harimohan at 6:54 PM

Worth showing students just to understand the level of commitment or intelligence one can aspire to - both 'Great Debaters' and 'Dead Poet's Society'. Now let me come up with a list on that. Maybe you should encourage a film club at the campus Raja, that shows films like these and causes them to think, engage and get exposure to.