Watched a 2008 movie 'Doubt' starring Merly Streep, Phillip Seymour Hoffman, Amy Adams and Viola Davis. The movie is based on a play and is a gripping story that explores human nature and what we believe as right and wrong. 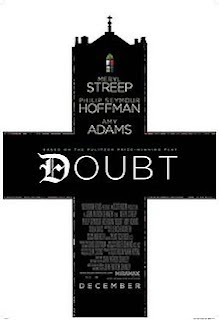 The movie is set in 1964, in a catholic church in New York that is attached to a school. Sister Aloysius (Meryl Streep) is the strict and hard as nails Principal of the school while Father Flynn (Hoffman) is the priest in the church. Sister James (Any Adams) is a young and new teacher in the school. Trouble begins when Sister Aloysius is told by Sister James that Father Flynn seems to have taken a special liking to the only black boy in the school that is full of Irish and Italian kids. Sister James reports that Flynn had called the boy during class to his rectory and the boy had come back smelling of alcohol and behaving weirdly. Sister Aloysius suspects the worst and tries her best to find out what went on, she will not tolerate any untoward actions that puts her wards in danger. Flynn says he was only being friendly to the child and no wrong had been done. The boy's mother herself believes that whatever happened, even if it is the worst, is fine as the boy needs a father figure, suffering from his abusive father as he is already. Sister Aloysius leaves no stone unturned, fights the defiant Father Flynn, and extracts his resignation when she fools him into believing that she knows what happened. Things pan out differently though, as Father Flynn gets a promotion, leaving Sister Aloysius with doubts about the whole system, about what is right and wrong, whether she should have just let things be and everyone happy - the boy, the priest, the boy's mother. Despite doing the right thing, she feels that may be it might not have been the right thing.

'Doubt' is a tautly made movie that does not leave the church or the school and its environs all through. The Principal, the priest and the new teacher take up the bulk of the screen space but the short role by the boy's mother enacted by Viola Davis was stunning. Viola Davis brings out the pain, the compassion and suffering of her family, her abusive husband, her confused and hurt son. It is a fine movie and one that provokes much thought. Great performances too and all of them were apparently nominated for the Academy Awards. Must watch for the serious movie viewer.
Posted by Harimohan at 1:48 PM