The 100 Day Book Sharing Experience Comes to an End!

The initiative of 'Spreading Light', which Dr. Suryaprakash insists is not an organisation, not an NGO but a thought process, of having 100 people share 100 books that impacted them over 100 days came to a close yesterday. The initiative managed to bring together over 300-400 readers, writers, speakers, artists, young, old, various religions together during its 100 day period when the Telangana movement was at its peak. 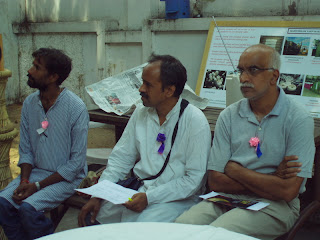 From Day 1 when I saw the board at Rhapsody food court in Srinagar colony, a place where I stop by for coffee and meet some friends, I was intrigued at the quiet nature in which the activity was going on. Some people had gathered in one room, I saw posters, saw 4-5 people talking inside, and looked in. After a couple of days I walked in and asked what it was about. I was pleasantly surprised to see two friends of mine, Raghu who was my classmate at St. Alphonso Junior college almost three decades ago and Praveen, my junior at the MBA college. They explained that it was a book sharing initiative. Sagar and I joined the next session to encourage what seemed like a crazy but well meaning idea. I also spoke on Day 20 on my experiences with The Men Within.

But to sustain the energy and enthusiasm for 100 days and not miss one day whether anyone showed up or not, was amazing and it sunk into me yesterday what this man had done. It was well planned and executed in its own way. Jayalakashmi, Dr. Suryaprakash's assistant, would keep the place open from 9 a.m. for any casual walk-ins. The sessions were all taped so we had audio files. Books were displayed. Count kept. Sessions publicised and advertised. More and more people walked in. Eminent writers came and spoke. Religious heads from various religions spoke of their holy books. Padma bhushan awardees, Literary award winners, famous movie directors, students, artists, sculptors, musicians - it was a cultural pot pourri with books as the main theme. If that was not enough there was much talk on sharing, on community building, on unintended hysterectomies, on unsafe agri practices and unsafe food - there was much to learn besides the program. And the team distributed 100s of saplings for people to grow kitchen gardens - I was fortunate to get 3 brinjal saplings and 3 tomato saplings - all planted and watered by me and Anjali. A program called 'Share your dream' was there as well - which had a clear structure and was a great intent. I find it unbelievable that none of the youngsters there shared their dreams! 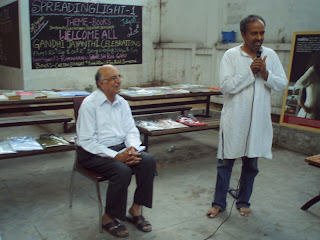 After the last session closed yesterday, one that was attended by over a 100 people, I spoke to Dr. Suryaprakash who conducted this whole exercise. I told him that he deserves the 'craziest person I have met in the world' award for pulling off a stunt like this. He laughed and said he had no agenda and took everything on the fly. He had no vision on how it would grow or who would come, but it all went by exactly as he would have liked. He recounted wonderful literary experiences with eminent writers who discussed Vasu Charitra and even also the many mediocre ones. 'I cannot tell you how thick skinned some people are,' he says laughing. But he says he was amazed at the reach and passion literature and books had on people, their depth, knowledge and the amount many had read. He never imagined the power of literature and books on people, When I asked him if on any day he felt tired and disheartened, he said no, he loved every day and looked forward to it. Not one session started beyond time, no solicited publicity, the good doctor had his won set of rules.

Fully supported by Mr. Prasad Raju who lent the space and his time, his family and his team, Dr. Suryaprakash certainly did something that not many can do. One of those crazy things that I can only attend once in a lifetime surely. Apart from what I learned and the people I met at the program, it is the madness and commitment with which he did it that impresses me most, and it is the kind of a crazy thing that can spark some change in the world. Dr. Suryaprakash is always in a hurry to change the world and laments at the lack of thought and concern among people to one another, he gets very emotional and sentimental, breaks down easily, sometimes talks so naively and vaguely, but backs his thoughts completely with actions that are precise, well defined and fully done. And he can look back with satisfaction at what he has done - without his knowing or seeing, he has affected many people in more ways than he can imagine and the impact will be felt in spaces much further. 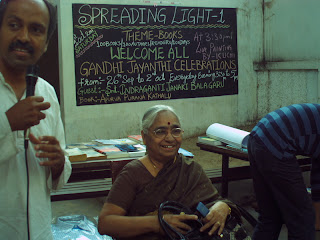 We dropped in again, late in the night to bid farewell to the intrepid doctor and his supportive family and shared a cup of tea with him. 'It's like after a marriage has ended,' he said and one could feel the same vibes. The guests were leaving, everyone was tired and it was time to put up the feet. His son Bharath finished reading 'The Men Within' and we had some fine discussions on it - I gave him a copy for himself and his sister who had not yet read it.

Many people will not know what to do today, a day after the program ended, because so many had got used to walking in to Rhapsody at 4 p.m. each day to meet friends, to hear new topics, to feel welcome amidst people and most of all to see the doctor busily and passionately bustling about. Well done Dr. Suryaprakash, you truly deserve the 'craziest person I have met' award and with fond hope that you will continue these missions of yours that will certainly make this world a much nicer and more interesting place.
Posted by Harimohan at 9:06 AM

I second your nomination and
Dr prakash like any visionary Walks ahead of current time .
Happy to note that the Crazy Idea has scored a century and "whitewash" over the ignorance and inhibitions.
Long live the King Prakash.
Bhaskar

Bhaskar and Giridhar,
I completely agree with you. A Happy Diwali to you both.

I am happy people discuss books.
I am happier that people discuss this event!
I was there too, first as a speaker and then as a participant on the final day!
Where is any occasion where people meet and discuss serious matters?
It must be happening in small groups.
I for one love and live books.
I wish, we continue the discussions in some manner or the other.
In my blog, I have been writing about books off and on!
May be there would be another blog for the purpose!
People have ideas. Only some, like Dr Prakash see that they turn into reality!
Let us learn it from him!!

Vijayagopal garu,
I agree with you. It was a fine experience and one I will remember all my life. Much to learn from Dr. Suryaprakash as you said. Maybe the book discussions can take off in a more organised way and bring book lovers together.

EditKRCUBE said...
When I grow up I want to be like Dr.Prakash :) I am lucky to have met him and to be a part of the 100 day project - I was in the right place at the right time. I always dreamt of doing the same things that he has done.

I observed that most people who have devoted their lives to social work are usually unmarried/single - Dr.Prakash has contributed to society leading a married life - he insists that his wife is a willing partner in this.

Rhapsody was the place for many readers like me. It was a great place to meet like minded individuals. I learned something new everyday of the 5 weeks I came there.

One day, it was past midnight and I was working remotely with my US clients and Dr.Prakash came on my Google chat and asked me if I will present a book - I was going back to the US in a couple of days. I said yes, but I could only do it in English. I was happy that I didn't say no. Now I am part of history and will be mentioned along with 99 other literary greats.

Hari I beg to disagree when you said Dr.Prakash is always in a hurry to change the world. There is a sense of urgency to his talk but his actions are deliberate, well planned and executed meticulously with patience - his 100 day project took 100 or more days - didn't it? That is persistence and forging ahead to realize your dream even if there was just one guest came to the meeting. He is frustrated that people are not much concerned about other human beings. They are busy acquiring wealth. Praveen said now a days people are amassing so much wealth that generations can live off of it.

I wish we had more people like Dr.Prakash in this world. He is a beacon. His idea behind this venture was to show us the path to emulate. Let us promise him that each of us who were there, will begin a similar project and will complete it successfully.

After coming back to the USA, I tried to do a 52 week / 52 book program - no one turned up on that day. Now a days everyone is busy - some people think book reading is for people who have nothing else to do. I will attempt once again and will make it work and share my success with you all.

Thanks Hari for sharing your blog with all of us.

Thanks Raghu and may your program take off well. You already have a captive audience of three at home what with your lovely young sons who are so supportive. Thanks for sharing.