'Ashes and Diamonds' is the second Andrzej Wajda movie I have seen after 'Kanal'. Interestingly this movie is the last of a war trilogy he made. 'Kanal' was made on how the Polish civilians try to flee from the Germans using the sewer system. (One of the main characters of 'Ashes and Diamonds' wears glasses because he was down in the sewers during the uprising for so long that he has to protect his eyes from harsh light. 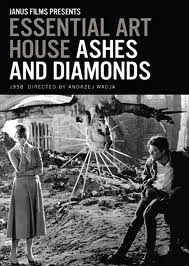 'Ashes and Diamonds' has many interconnected plots and was apparently based on a novel. It is set in a small town on the day Poland is liberated from German occupation. In the ensuing confusion, Poland struggles with the communist and the right wing ideologies. As all action takes place on the first day of liberation, the confusion is even more palpable.

It is an interesting movie as many characters keep coming back through various connections. The two bodies of the young men killed by mistaken identity suddenly turn up in a crypt where the drunken killer and his girl friend go for a stroll and he sees their bodies. The left wing leaders killers and his sister-in-law and even his son are on the side that wants to kill him and they keep bumping into one another. The double agent secretary of the town Mayor who gives information to the right wing soldiers also ends up with no job in the end. 'Ashes and Diamonds' shows the pointlessness of war, the perspective of the soldier who loses belief in the cause, the danger that love for the girlfriend, for the son, for the land gets these men into. It was almost like a play to me, with few characters that keep bumping into one another. Interesting movie.
Posted by Harimohan at 10:04 AM