'The Cyclist', directed by famous Iranian director Mohsen Makhmalbaf, is the story of a champion Afghan cyclist who had once ridden his bike for three days non-stop. He is now challenged to ride the bike for a week to earn money to save his ailing wife. As always there is much more below the surface in the Irani movies than one can perceive. 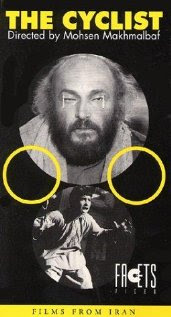 Nasim is an Afghan refugee in Iran whose wife is in hospital. He has to raise money for her hospital expenses but cannot raise much with his on-and-off work as a well digger - a work he undertakes with the help of his young son. (The scene where he has visions of his young son falling into the deep well haunts the viewer, just as some of the other scenes that appear in Makhmalbaf's movies.) Anyway his friend sees his desperate attempts to raise money and introduces him to a circus owner as a champion cyclist. The businessman senses opportunity in the poor man's desperation and eggs him to try to cycle for seven days around a spot. He starts advertising the event and people start flocking to see this event of a poor man trying to save his wife.

Behind the scenes, two wealthy businessmen wager a bet on Nasim's event. It appears to be common for them to bet on such things. Poor people flock to the event to sell their wares, to see the poor man fighting sleep deprivation, weakness and even malicious people who wish to end his event for the bet. There are two ambulances - one with staff trying to sustain Nasim and another trying to weaken and debilitate him - big money is involved. There are political undertones as the Afghan community comes to watch one of their own try to rise above their circumstances - one can see how their wages rise during the one week period, doubling from 200 tomans to 450 tomans. Nasim does all he can physically, even sticking match sticks above his eyelids to keep his eyes open. In the last stages, when he is almost falling off, his son frantically gets on the bike, throwing water, slapping him and coaxing him to stay awake. People get on the bike to take their pictures, puncture the bike, agitate in the path of the cycle - but Nasim is determined and in a heroic effort conquers all. But he is so exhausted and delirious that he keeps on cycling even after the seven days are over, even as his son runs around him, telling him that the task is done. The circus owner packs off with the good looking fortune teller and the wealthy men settle their debt.

Makhmalbaf's movies show much more than what is evident. The socio-political scenario of Afghan refugees in Iran, their impoverished existence, their lack of hope and alternative is shown brilliantly. On the other end it shows the triumph of human spirit for Nasim as he accomplishes something rare for himself and his people and sows the seeds of hope. The byplay of exploitation and human insensitivity is shown starkly and exposes the lengths to which humans can go to further their own selfish interests. But then there are people who also help Nasim, the referee who turns a blind eye when Nasim falls off the bike once late at night in sheer exhaustion and is replaced by another cyclist by the circus man for a short while and the female doctor who refuses to sedate the weakened cyclist and in turn sedates her superior instead. Another movie from the Iranian stable that will remain in the mind for a long long time.
Posted by Harimohan at 8:14 AM

Excellent review. I am posting a series of reviews for different movies and titled them "Worth Watching" in my Facebook. Do you mind if I link to your reviews? Please let me know.