The afternoon was devoted to a visit to the OP Jindal museum, a delightful piece of work. The museum shows the life of OP Jindal, founder of the Jindal Group. For someone with ordinary beginnings, he achieved a lot in his lifetime - very inspirational. I liked his vision and mission - simple and to the point. He knew what he was doing. And he would be proud to see how big his dream had grown. 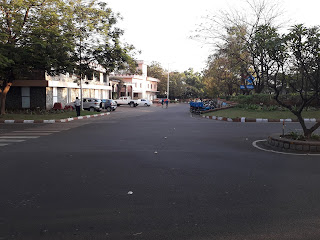 The sports complex is open for the township people - shuttle, swimming, squash, basketball, table tennis, and an open ground to play - all in superb condition. There is a J Max theatre where we watched 'Gully Boys' one day and next to it are a couple of restaurants, an Internet cafe and stuff like that.
Beyond the sports and theatre complex is the cricket ground, as good as any and fit enough to play junior level state matches and University games.
We walked down to Kaladham, after this, for the first time. It was a short ten-minute walk from Hampi House and the place where we would be doing most of our work from tomorrow. It's very thoughtfully designed and people visit it just to enjoy the beauty and serenity. It's spaces are named Hampi Sthal, Akash Manch, Parijaat Kadamba, Shuchi, Bodhi and Chandra tal. There is a special tour of Hampi in a Hampi museum with some sophisticated gadgets (I wish I had spent more time there) such as interactive technologies that offer high resolution, augmented stereoscopic panaromas in 3D views. The Hampi museum is in collaboration with Museum Victoria and exhibits works by John Fritz, John Gollings, Sarah Kenderdine, George Michell and Jeffrey Shaw. The museum and Kaladham are initiatives of Ms. Sangita Jindal and JSW Foundation. A store, a restaurant, a pool, an amphitheatre, several spaces for artists to work, a Board room and a store where one can buy Hampi handicrafts and other things.
Work from tomorrow at Kaladham.

Writer profile 3 - George Mathen aka Appupen, Graphic Novelist
George Mathen aka Appupen is a well known graphic novelist. When I ask him what the difference is between graphic novels and comics he said they were pretty much the same - the only difference appeared to be that comics were seen as stories for children and graphic novels for adults. His work is incredibly rich and one look at it and I wonder where he gets the energy and patience and more importantly those ideas. He is easy to talk to, has a great sense of humour, is very very authentic, makes amazing connections and is a man after his own heart. George, in an interview with Catherine Rhea Roy for The Hindu is described as 'the roguishly charming fellow from the back bench in college, who cracked inappropriate jokes, carved his name on desks and is always part of a group in the foyer.' The backbenchers - my clan.

George studied in Mary Roys school 'Pallikoodam' near Kottayam and is proud of the fact that he is always mentioned in her top 5 students of all time. It's easy to see where he learned to be fearless. A junior state cricketer (he was the cricket captain at the Under 16s for Kerala), the left handed batsman moved to Mumbai to study at Xaviers. He worked for a few years there in advertising, animation. He paints murals for corporates for the money, does graphic novels for the love of it. He created a world called Halahala and it's intricate work. Graphic novels include 'Moonward', 'Legends of Halahala', 'Rashtrayana', 'Aspyrus', 'The Snake and the Lotus' from what I know. He is prolific - forever in his own world. When he moved to Bangalore, he played with a band where he was the drummer. Two band members started a business together and fought - and that ended the band. George is not happy about it. 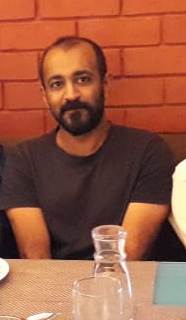 In many ways I find George to be a hero-like character (Howard Roarkish). He will go on creating his stuff because he wants to say it - and do it well - unlike most writers who have half an eye on the audience all the time. His stuff is very political and he uses satire, wit and his art to mock at the world that we live in. He uses his art to call out to the king with no clothes while the rest of us do not have the courage to. Someone said - he will get trolled. I don't think he will - his work is too cerebral - it does not fall into the troll's frequency.

George and I and Piyush spent some late evenings together where they decided that I ought to experience certain things in life. He'd take off for runs late in the evening. He gifted me a copy of his 'Rashtraryana' and Anjali a copy of 'Aspyrus' - an indication of a generous soul. Under the backbencher I saw a thoughtful and caring person (we backbenchers are like that!) It was good to catch up with him at the Times Lit Fest and we spent time hanging out at the festival, at Nimmi's drama, on the Metro and at Koshy's. He is one person I am glad I met, and connected with. See you soon George!