Prajwal Hegde is the Tennis Editor for the times of India. She played tennis at state and national levels and when she began her career in journalism it was pretty obvious that she would cover tennis, and other sports as well. She is part of Tennis Writers Association (has been elected to its Board) and Media Commission. Suffice to know that she knows the world of tennis and sports well. 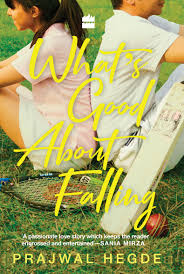 So for Prajwal to set her story in the life of an Indian woman tennis star Arya Ashok, who hails from Bangalore, and who is rising steadily in international women's tennis is easy. What's difficult is that Arya falls in love with a younger man, two years her junior at twenty-five, Arvind Ram, a talented cricketer - and guess what, a fast bowler to boot. Arvind is also a playboy of sorts and is rather temperamental. What with IPL and success at cricket, Arvind's life can only be imagined. More so, no one knows what a fast bowler thinks - not even himself. (In fact, most captains wonder if fast bowlers have the capacity to think at all!)

The Indian cricket team shows up at Wimbledon and Arvind starts wooing Arya, who returns his eager serves well. After a quick leap into the hay (well written!), the two cope with the problems of their own stardom, the media, paparazzi, unwanted stories, pressure from families, ups and downs in the game, Mars and Venus behavior and such stuff. All this leads to some issues - which is to be expected and then it all boils down to the big climax. Will they fall in love again or will they choose not to?

Prajwal takes us into the world of sports effortlessly and we can pretty much visualise ourselves in the Wimbledon or the Australian Open or the many scenes that happen in the lives of international sportspeople. She makes their world believable, makes the characters credible. It's not some breezy romance between two high-on-success sports icons but a measured take of their conflict between their vulnerabilities and their instinctive desire to win. I suspect Prajwal's Irishman friend, Pat Cunningham, would have loved reading this book that he seems to have sown the seed for.

Good debut Prajwal. More to come surely. All sports and romance buffs can grab their copy.
Posted by Harimohan at 8:50 PM