Mornings seem kind of following a particular trend. I head out for a walk and if Piyush is around we go together. One day we met Nimmi who was jogging around the campus. George works at night so he jogs also in the late evening. George also played junior level cricket for Kerala and even led his state side! Vishakha heads off for a run or a walk in the mornings and so does Shubra. Hash, who also plays soccer (and also worked with Cricinfo in an earlier avatar as a cricket journalist) runs in the afternoon. I decided to check out the cricket nets one day. I had seen some boys playing on a turf net at a corner. On one of my walks, I discovered a full-fledged football ground. The JSW owns or co-owns Bengaluru FC, Haryana Steelers of the Pro Kabaddi League and owns 50% of the Delhi Daredevils team in the IPL. The sporting connection is just too strong.
We would normally hit the Convertor for breakfast by 815 or so and hang around there chatting about this and that until it was either time to go back for a shower or head to Kaladham. Breakfast would go all the way from South Indian (no Besibele bath though) to the bread omelette, puri bhaji, fruit fare.


I decided to go back to the Inspire Institute of Sports because I found the idea really interesting. I asked Pratik, the Manager of the facility if I could meet any of the coaches. He said I could meet Antony Yaich, the Track and Field coach from France who has a record of coaching Olympians and World Champions. It was a fine afternoon spent with him, finding out how Olympians are made and the challenges they face.
I also had a chat with Bala, his assistant coach who hails from Andhra. But more importantly, I also met Elakkiya Dasan, a 24 year old athlete who is a medal hopeful in the sprints. It was an insightful experience and my understanding of the entire enterprise improved.

We had a reading session. I had so far read a piece I wrote about my feelings about the Unfestival,  a chapter from 50 Not out! Sharon read poetry. Sathya wrote diligently everyday and completed a story or a poem by end of day. Piyush came up with short story ideas. Hash read beautifully from his past work, enjoying it as he read. Brandon read a short piece he wrote - poetic. George showed us a sample of his work. Vishakha showed a couple of paintings she had worked on. Elisabeth showed a wonderful animated documentary of her work - it was really fine work. Her current theme is that of the radicalisation of young people in Germany into joining the ISIS.

Today I read a bit from my main piece - the one on Inspire Institute of Sports and then headed off to meet Sarita, my classmate who lives in Hospet, 40 kms from Vidyanagar. It was a nice ride and the driver told me that he had come to Vidyanagar from Uttar Pradesh 15 years ago. His relative is the priest in the temple. His family lives there in UP, his sons tend to their farms, and he earns money here. He had got his four sisters married off and saved a bit for himself. Now he says 300 of his people are working in and around Vidyanagar. He goes home once, or twice a year. His sons are now grown up.

Sarita was looking just the same. Shailesh her husband has been working in the steel sector for the past 30 years and has now turned a consultant. Their son, now 28, works in Chennai. They have a lovely house from where we can see the dam on the Tungabhadra. After spending an hour chatting with them and eating some lovely paani puris, I headed back.

Somewhere now my dates are getting mixed up so I will go with a general feel. One of the evenings we hit the bhel factory behind the Hampi House after the reading session and ate of lot of bhel, vada pav and stuff like that. One other evening we headed off to watch 'Gully Boy' at the JMax. It was fun. Of course, we still headed back to the Convertor for a spot of dessert. Piyush and George would tell me stuff about their wilder days before we headed back to our rooms.

We seem to have found some rhythm by now.

Writer Profile 5 - Brandon Damien Ingram, Author, Actor, Songwriter
Brandon is from Colombo, Sri Lanka. He is an author, actor, songwriter and singer. His first two novels deal with child sex tourism, sexual identity. His themes generally are dark. He is spiritually oriented and explores his spiritual boundaries as a practitioner - not for the sake of 'knowing'. He was a former ad man who is now just 'being'. 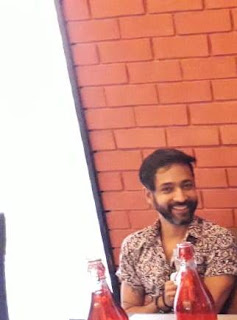 Brandon is very good looking, sensitive and smart. He is super comfortable in his own skin, laughs easily and genuinely. He is incredibly talented - tells a story and keeps us all spellbound. He wrote his own songs and sang them so beautifully. He knows more Bollywood songs from the 90s than any of us do. He has these wonderful insights into spirituality and energy work and I enjoyed the walk down the Hanuman hill with him discussing it all. He sits meditatively and writes deep, insightful and powerful stuff. He showed us a small clip of immersive theatre of which he was part of - it was so intense and he had transformed so much into a villain for the role that it was amazing to watch. It definitely left us all disturbed. And we cannot forget the way he would say Oh my God!

Brandon is heading back to Colombo for a role in a feature film. After seeing that clip I realised what he is capable of. I saw another video of his where he talks about sexuality - and I cannot help but wonder how well he articulates and how well he holds the audience. And if I forgot to mention - he is high on fashion. Hair changes, clothes change - complete transformation - and you wonder if he is the same person. Brandon blended so easily with the group and the beer sessions were great fun with his stories. In fact everything was fun with him around - you can be comfortable with him in silence and in a riot.

A sample of his writing, from his blog. It's very good.
https://brandoningramsblog.wordpress.com/2017/03/08/happy-8th-of-march/

Brandon - hope to see you soon man. And do send me that recording of your 'Dark side of beautiful', It has such a haunting feel to it.