Apart from the sessions there was 'The Garage' which had literary crafts and workshops, exquisite art forms by Art Mantram and other stuff. ID Fresh Food gave away free coffee at its stall.

Day 1
I had a session at 1130 in the morning moderated by Prajwal Hegde who had just written a book 'What's good about falling?'. Prajwal is a sports reporter and mainly covers Wimbledon. Others on the panel were Olympian swimmers Rehan Poncha, Nisha Millet and IPL and Karnataka player K. Gowtham.


The festival started late for some reason. I attended the keynote speech by Devdutt Pattanaik on Astitva, identity, being and much more which he covered in 30 minutes.


Minati's book of poems which sounded quite nice. Prajwal came and met me there and we figured we should meet at the author's lounge.
Amazing. I could not make much sense of it except that he said he did not exist if the audience was not there. I met Saroj and Minati there and browsed through

The lounge was guarded like a fortress and I wondered why. Just some authors after all. But I could see some known faces, names. 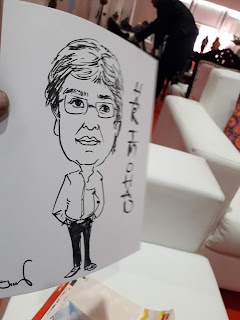 Since not many people had come in yet, I got a lovely caricature drawn by the talented Jinoy. Loved it.

In the author's lounge I met Satya and Vestin whom I had met at Anita's attic. Satya had written a fun book and it really looked interesting. She also told me that her daughters loved 'The Men Within'. I met Dr. Radhakrishnan Pillai, Anita Nair, Kuljeet Yadav. Prajwal introduced me to many sports reporters - Manuja Veerappa being one of them. Anita introduced me to many people she knew - Ashwin Sanghi was one - as the fast bowler who was a first-class cricketer turned writer.

The session went well. Topics included how one copes with success and failure, how it affects relationships, what it takes to be a champion, when do you know you have reached your potential, how does one conduct oneself in public. Rehan and Nisha spoke about the dedication one needs to be a champion, about giving back to the sport and so on. I found Lalith in the audience, someone who had read 'The Men Within' years ago and I was thrilled. He asked me a question about vanishing grounds and what the answer was. I felt that it's for schools to believe that sports develops character and if it does, they can find ways to hire grounds etc and expose children to sports. We took a picture. George came sometime in between and we were on for Nimmi's play that afternoon.

After the session, we hung about the place for a bit. Turns out that Anita and George are great pals too. We chatted a bit and then left to Rangasharada. Show is at 430 but we needed to get a bite. We decided to go to Rangasharada and eat at its famed canteen.