We had a full day trip to Hampi. Hopefully, it will inspire some stories. We left at 8 in the morning. George had some work in Bangalore so he left for the day while the rest of us geared up for a day long trip. Caps, shoes, comfortable clothes, water. Rajsekharan and Geeta to help us along.  We piled into our minivan and headed Hampi-ward. It was 30 km away from the Vidyanagar township.

First stop was the Queen's bath. It was a place where the queens bathed.

While the others climbed up the steep steps which looked very uninviting to me, Sathya heard a puppy wailing someplace and followed her instinct. In one corner of this large field was this little puppy stuck between a rock and crying its heart out.  Sharon, who seemed to have a tender hand with animals, helped. I hung around a bit, lifting a stone etc. Pup owes its life to Sathya.


Then there was a step well which was supposedly shifted stone by stone from another location. No stepping into the step well.

Past a few ruins, into some secret dungeon which was pitch dark where secret plans were made.

Past that into the lovely Hazara Rama temple. I met Razia who has been sweeping the place for the last twenty years. The temple is not functional but lovely sculptures from the time of Ramayana exist.


Some sandwiches and stuff and we headed off to the elephant stables. This enclosure had the zenana mahal or the Queen's lotus palace.


Then the elephant's stables. 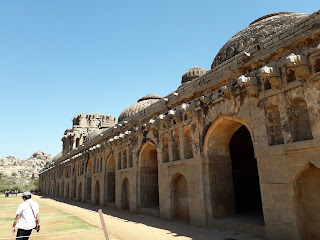 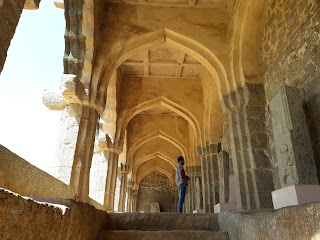 
We had a darshan of Lord Virupaksha, came out and most of us got blessed by Laksmi the temple elephant which is in penitence after killing its mahout some years ago. I did not have a good feeling about it and abstained and so did Brandon who said he has this thing about animals in captivity. I joined for the picture with Lakshmi the elephant but Brandoon did not join the picture too.


The mustard Vinayaka temple. We got into a scrap with the cops for wrong parking and that delayed our next plan so we headed to the Mango tree restaurant for some fine lunch.

From there, a coracle ride.

We stopped midway to see the koti lingas and met some swamis. They were on a pilgrimage to Srisailam which they hope to reach by Sivaratri. They asked me to take a picture and send it to them. I did - both.


Back in the coracle. This time he did some stunts like spinning it around very fast so it got us dizzy. We got off on the other side of the river. Here we saw the king's royal balance where he weighed himself in gold and stuff and distributed that among the public..

Then the Vittala temple, which houses several temples. There are the musical pillars which are now forbidden to touch, the famed chariot etc. 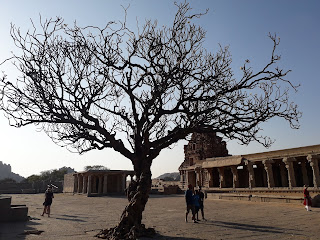 Piyush, the photographer, and I, walked the 1.5 km to the cars. The others waited for the golf carts to transport them. The stones along both sides of the road was where the market was located - piles of pearls and precious stones they say. On the way we saw a stepwell, a place where we build houses by putting small rocks on top of one another. Piyush and I had the most satisfying glass of refreshing, fresh sugarcane juice at the end of it.


Onwards to the sunset point.


The journey back to Hampi House was pretty much the Great Piyush show as he reeled off song after song from Neil Diamond to Kishore Kumar to the Beatles and sang so well and with great energy. His energy was so infectious that he dragged everyone, especially Brandon into singing. Brandon was feeling pretty unwell until then but he broke into a couple of his songs - 'The dark side of beautiful' remaining with me forever and another one. Both own compositions, beautiful and he sings so well. Sharon (sings well and knows all the lyrics), Shireen, Shubra, Sathya all pitched in. I asked Piyush how he sang so well and he said he once sang for a band in college - what does he not do? Sing, write, direct.

End of the day, we dragged ourselves into Hampi House. I am sure we all went and got ourselves a drink or two at the bar after that.

The trip was well-organised thanks to Raj and Geeta who took care of all our needs. It was beautiful and will certainly inspire creative stuff.

Writer Profile No 6 - Chandrahas Choudhury, Novelist
Hash is the most literary of the lot - if you know what I mean. He has written three novels 'Arzee the Dwarf', 'Clouds', and an upcoming one on a Chinese restaurant which appears quite funny. He edited an anthology India: A Traveller's Literary Companion. He reviews books on the National, WSJ and the NYT. 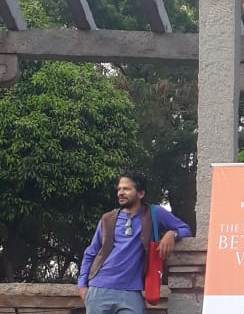 Hash worked for a while as a cricket reporter with Cricinfo and remembered fondly the days when he bowled to Gilchrist and interviewed Sehwag. His books are critically acclaimed and when we listen to him read from his works it is evident he enjoys his work immensely. I wish I could be like that too. It is very evident when he reads and speaks that he knows his craft far better than most of us. He takes it very seriously and has his notebook where he makes notes. He is very focussed and sticks to his writing schedules.

Hash lives in Delhi and Mumbai. He plays football with a club. Pretty fit. Goes for mid-afternoon runs. Enjoys his beer and was the prime mover for beer sessions in the evenings. Also very thoughtful - keeps an eye out for the little things that most miss out and quietly takes care of that. There's much to learn from him in the writing part and I hope I will get some time to spend with him and get a peek into his writerly mind.

For those who have not read his stuff, check his books out. They are worth reading. And hopefully Hash should be coming to Hyderabad sometime so we can meet over Irani chai someplace.
Posted by Harimohan at 12:52 AM