Balrak Khanna went to England in the swinging sixties to study English. He, however, got interested in Painting and became a highly successful painter. He wrote four books as well - with the 'Nation of Fools' being adjudged as one of the top 200 novels in English in the UK. He lives in London. 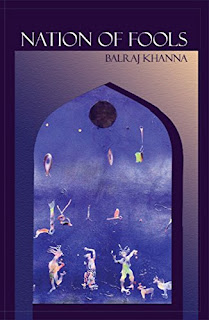 Lalaji owns a sweet shop in Camp area outside Chandigarh. His life is small and happy. The randy Lalaji however has eyes only for his wife. Their only son Omi is no good, but he is a spirited kid. Lalaji wrangles a deal in Chandigarh where he hopes he can get Omi educated and push him out of life as a halwai. Chandigarh brings its own bunch of problems - Income tax raids, girls, a new restaurant, money and relatives.  All's well and that ends well.

Through the life of Lalaji and his small ambitions, Balraj Khanna shows us life in India in the sixties. The corruption, politics, sex, religion, partition, untouchability, hypocrisy, the rich and poor divide, it is all there. Thanks, Vinod bhai.
Posted by Harimohan at 2:29 PM