I seem to be missing a day somewhere but that's ok. A walk in the morning, breakfast and Kaladhama once again. Nimmi was leaving today - she is directing a play and had to join her group in Bangalore. I would be there in Bangalore on Saturday so I told her that if George came along I would come to watch the play. George and I were at the Times Lit Fest Bangalore on Saturday. I think Nimmi booked our tickets then and there. We were on.

Nimmi's farewell was a long drawn process because the car would not come and we all waited for ages - so long that she tried to shoo us away inside. After Nimmi left we went to Kaladham. Today, I decided to write about how my co-writers inspired me. Most of the day was spent in writing that. Lunch and back to Kaladhama. Srinivas from the JSW Cricket team came to meet me and fill me in on some of his cricket stories.

Today was also the time when the official photographer came and took some pictures. We all posed. I mean everyone else posed. I for some reason could not even manage a smile. George could actually see that I was not smiling even though he sat behind me - that's how much I did not feel like smiling. Anyway pictures done, we all headed back to our readings. I read out my stuff about everyone else which was generally well received. Sathya laid out the general idea about when to submit our pieces and the general idea about how they would compile an anthology with our pieces, all set in Hmpi or Kaladham or Vidyanagar.

We headed back to an Andhra meal followed by some beer.

It was 12 by the time we hit the sack. Tomorrow is the last day at the writer's retreat, residency, whatever.


Writer Profile No 9 - Shireen Quadri, Editor, Travel and Adventure Writer
Shireen is the founder and publisher of the Punch Magazine and worked with several publishing houses before that. Travel and adventure are her passions. 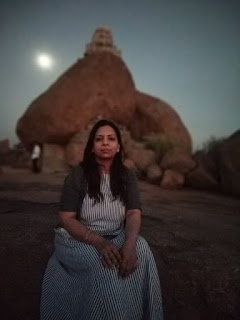 Shireen has the editor's eye for stories and she gave me feedback on a couple of pieces I read immediately. I liked that. She would be a fun person to hang out with in the evenings and had many stories about publishing and movies. She climbed up the Hanuman Hill which I felt was a good achievement - 575 steps. When I was going to the IIS she came with me to check out the place and was interested in the piece I was writing about it. George caught on to her - 'why are you so suspicious' he would tease her and I'd love to listen in on their conversations. Or the Miranda House conversations with Piyush. On the last day she left with George and Brandon to Bangalore - and the two of them convinced her to take a long trip into town. I can totally imagine Shireen getting convinced.

She is great fun, good for a nice and easy chat anytime because there are so many things you can talk to her about. Now to ask her how one gets published in the Punch.

You can sample her writing here
http://thepunchmagazine.com/the-byword/review/upamanyu-chatterjee-meat-of-the-matter
Posted by Harimohan at 11:16 PM