We shook off the effects of the day before and headed back to Kaladham to get back to the job. We spent the entire day at Kaladham.

I approached the boys who were playing cricket on a turf net and asked them if I could bowl. They kind of waited until they regular bowlers bowled themselves out and then when they ran out of bowlers asked me to bowl. I must have impressed them because shortly one of the other bowlers gave me a better ball and when I started hitting the right line and length and started beating the outside edge and finding the edge, there was a change in their approach to me.

By the end I got their better batsman out four times and they all shook hands and asked me to come back. But when I went again, I found only one person there - Srinivas, their coach. Srinivas is a player-coach for the JSW team which recently won a prestigious All India Steel Manufacturers tournament, only the second time in close to twenty years. Hmm, there's a story here I thought. I invited him to Kaladham but he did not make it that day. The other times I got to bowl there was on the day before last evening and on the final morning. Piyush was there to get some pictures of me bowling.

Rajsekhar organised a lunch at a popular Mangalore joint on the campus. We went there for lunch - Piyush (the organiser), Shireen, Hash, Raj. Lovely vegetarian food. The owner served us.

Back to Kaladham. I fixed up a meeting with Rushdee Warley, the CEO of Inspire Institute of Sports, to get his perspective. The meeting was scheduled for the next day at 10 am. However we were scheduled to visit the Hanuman temple which is also known to be a sunrise spot. The temple needed us to climb 570 steps and get off the other side. A visit to the Pampa sarovar was also scheduled. This was where Rama met Shabari.

Rajsekharan asked me to postpone my meeting and I fixed it for 2 pm. Antony Yaich also wanted to make some corrections in my draft which I shared with him so I was to meet him at 130. I asked Vishakha if she wanted to come with me to click some pics of Antony, Elakkiya and others. She was game and so was Shireen who had not seen IIS yet. 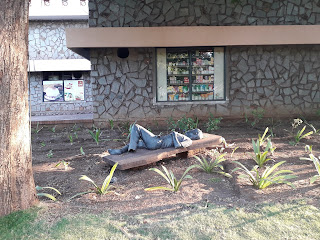 Reading in the evening. Then we headed off to the bar to get ourselves some beer. These days the evenings are generally filled with beer, stories from the great storytellers and then dinner.

Writer Profile No 7 - Nimmi Raphel, Actor, Dancer, Musician
Nimmi is a resident actor, dancer, musician, and puppeteer at Adishakti - a laboratory for theatre arts based in Pondicherry. She has been studying theatre since 2001; prior to that she studied Mohiniyattam and Kuchipudi in Kerala Kalamandalam (1995-2001). In Adishakti she has performed in plays Brihannala and Ganapati at national and international shows as well as The Hare and the Tortoise. From 2008 she has been operating lights and had recently turned director with the play Bali. Nimmi does interesting work at Adishakti - such as relating tantric centres in the body to movement behavior - and conducts workshops about it. She received the APPEX fellowship in Bali, went to an exhange program in Korea. She wrote, directed and performed in a play Nidrawatham, received junior fellowship. All this from the Adishakti website. 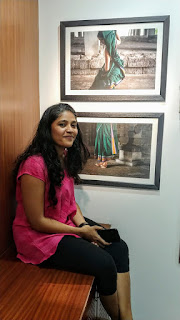 Nimmi was one of the big energy sources in the group, easily approachable, always with a smile and upto some mischief. She'd head off for her morning jogs, do some diets of hers very religiously, do her yoga certainly. At the Kaladham she found a tree and settled down under it, overlooking the amphitheater. Inside the Board room we found pictures of her - she was pleasantly surprised to find herself there. Nimmi acts in movies - she acted in 'October' and am sure she gets more movie offers than she reveals. She told us of how tomboyish she was when she was a child and we can totally get it.

I told Nimmi if I could ask my students at the Department of Dance, University of Hyderabad, to apply for an internship at Adishakti and she said they could. I told her to come sometime to Hyderabad and give a lecture to my students. Plans, plans, plans. George and I went and saw her play Bali in Bangalore. I loved it.

There's something about Nimmi. Nimmi, hopefully see you in Pondicherry, if not in Hyd.

Posted by Harimohan at 3:24 PM