Early outing. Left by 6 am or was it before? We hoped to catch sunrise at the Hanuman temple. Shubra, George, Piyush opted out. That left Sathya, Hash, Elisabeth, Vishakha, Nimmi, Brandon, Shireen, Sharon for the short day trip. We headed off a little behind time. The minivan took us around the river and after 45 minutes we were at the foot of the 570 steps. Sharon was feeling unwell so she sat back in the van.
To me, these are great challenges. But I do them to tell myself I can do it. The last time I had climbed Simhagad at Pune was a huge achievement for me. Or even the time when I got back to bowling after two years due to a shoulder injury at a resort near Pune was another. So the 570 steps meant something more to me. It's me vs me.

So I headed off in advance knowing I will slow down. I got some place and stopped. I realised it was not so much the breathing that was bothering me as were my legs. they had become jelly. Hmm. Nimmi and Brandon overtook me. Vishakha caught up with me. After some 30 minutes or so I got up there, sweating, in one piece. I got one small kid, Basava, to come and take my picture. He was thrilled at the responsibility.

The Hanuman temple was just opening. There were many monkeys around. While we were in the temple a few langurs just went wild, trashing everything that was in their sight. The priests told us to stay out of their way - they could knock you out for 15 days. Temple done, we headed down. Brandon and I had the most interesting conversation about spirituality, the champion's mindset, love, manifestation, law of attraction and so on.
Back in the minivan we headed out to the Pampa sarovar where Shabari met Rama. We encountered an angry priest, ignored him, ate some lovely breakfast and headed back. Kishkindha, the kingdom of the vanaras, is supposedly located around Hampi someplace.

Back at the Convertor, a quick lunch and I headed off to Rushdee Warley along with Vishakha and Shireen. I had a wonderful time with Rushdee, speaking about the champion's mindset and institute's goals. Back at Kaladham I changed, went to meet Srinivas and his young protege, Shubham who made it to the Under 16 zonals last year after scoring heavily. He is 15 now and bats well. I also met Thippe Swamy who lives in the local village Vaddu and who works as an outsourced employee operating the conveyor belts.

Most of the crowd went to visit the steel plant. I could not because of my meetings with Warley and co. Once again we read from our work, headed back to the beer table.

Writer Profile No 8 - Sharon Irani, Poet, Editor, Performer
Sharon does many things. A poet first, an editor, a biker, a dancer-performer (she does things on those hanging strips of cloth). She does them all well I should think, going by the impression I get. She is very sure of herself, no rough edges, takes the trouble to do her research well and all in all, knows what she is talking about. She managed a celebrity, rode a Jawa and then a Bullet, looks like a model, performs some crazy stunts, writes beautiful poetry and is much fun. 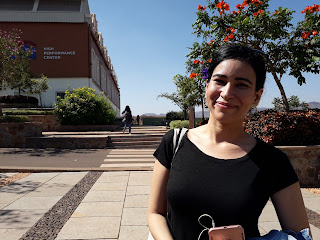 At Kaladham she chose a place by the flowing water on day one and then flitted all over. one day she came to the Board Room where Piyush was playing music. She prefers quiet - and if you listen to her poetry, you know why - there is a stillness that is very nice about it. I get her poetry! She sings very well, knows all the lyrics, knows much about many things - books, films, stuff like that. She is very good with animals as I saw her with the little pup that Sathya rescued from sure death. Lots of energy, lots of promise, lots of talent. It has to show up sometime soon.

I am a second gen Irani she says. I had to ask her the dumb question - what's the difference between Iranis and Parsis. Of course she gave me a detailed explanation. Ex-Mayo college, writer of book reviews and other stuff, she is a regular at the Jaipur Literary Festival. She read out my piece in Knot for Keeps - the day I went to meet Sarita. Thanks so much Sharon. See you soon.

Posted by Harimohan at 4:01 PM