The competitive miss has an eye on the first rank, the gold medal. I know she is competitive but did not know how she felt about competition, especially when they got the better of her. The other day we were chatting at end of day, and she found the space to bring this out. She had got a silver medal in a couple of subjects and an unlikely contender had taken her spot away. 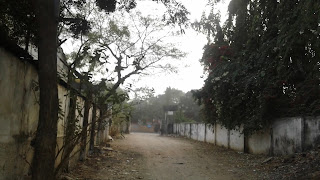 'S came first,' she said. I could see the disappointment in her face, her voice. 'I don't know how he got so good in those subjects. When I asked him he would not tell me. He treats me like a competitor and does not want to share.'

It was a tense moment so I kept quiet. Most times I don't know what to say anyway.

She processed it for a bit and then the mood changed.

'You know I am actually happy for S. He worked hard and deserved the gold medal.'

Ah, that's a good response. But I know that it does not mean she will let him go easily. S better brace for a fight now.

It's a good response under stress and disappointment. We talk about it a lot in cricket - being happy for each others success, but its only lip service mostly. It's a good space to be in as a team if we get that into the team culture.
Posted by Harimohan at 5:51 PM