A walk in the morning around the township. Met Piyush along the way and we explored a bit. Breakfast at the Convertor and then off to see what's around.

Inspire Institute of Sports
First stop, the impressive 200 crore Inspire Institute of Sports, Parth Jindal's idea that has the ambitious aim of producing medal-winning Olympians. The best facilities in India, international coaches, education and a two-year contract. Currently, the areas they have targeted are - track and field, judo, wrestling, boxing and aquatics (not yet started). CEO, Rushdee Warley has coached Olympian swimmers and so has Antony Yaich who has coached Olympians in the track and field. The facilities are outstanding, the idea audacious.

We visited the Vocational Training Centre the Textile and Apparel Centre that provides an opportunity to women. Apparently, Bellary which is 30 kms away is a major centre of denim production. They were stitching denim jackets, trousers etc. Piyush and George bought a jacket each.


We stopped for tea.

That was it for the morning. We headed back for a spot of lunch and a plan to regroup at 4 in the evening for some more checking out. We were getting a sense of the place by now. The Jindal factory and township pretty much sustained a lot of activity around this place.

Writer Profile 2 - Piyush Jha, Ad man, Indie Film director, Crime Fiction Writer
You cannot ignore Piyush. Handsome, articulate, approachable, easy to talk to, knowledgeable, man of the world - among other things. A Bihari who pretty much grew up in Mumbai all his life thanks to his father who worked in the services, Piyush, is a full-on Mumbaiwala. Forever fifteen is his motto. However, there is that bit of a Bihari in him which makes him all that more interesting. A degree in Psychology from the University of Mumbai followed by an MBA, and then a successful career in advertising. Then the creative bug got to him and he split, set up his own production house, made ad films, and then directed his first film - Chalo America (2000, financed by the NFDC). In 2004 he directed 'King of Bollywood' with Om Puri and Sophie Dahl (Roald's granddaughter). In 2009 he made 'Sikandar', a movie set in Kashmir. Funnily for a good looking guy he never acted in his own films (didn't answer me when I asked!). 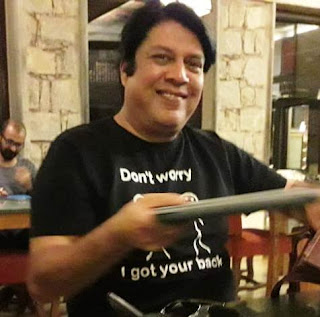 As a writer,  Piyush has written crime fiction - 'Mumbaistan' is his first book, followed by 'Compass Box Killer', 'Anti Social Network' and 'Raakshas: India's No 1 Serial Killer'. Also a satirical novel 'The Great Bowel Movement'. He played me a voice over he had done for an ad film. And he was part of a band when in college. And he was Secretary students union. And surely other things he didn't tell me about.

For someone who has accomplished quite a bit, Piyush is very approachable and great fun. He shared his experiences easily, asked questions about our lives, has a fine sense of humour, gave advise to George and me on how to close deals with projects we don't want to do. He has tremendous energy, has firm beliefs in sustainability, has turned vegetarian and teetotaller. He has endless stories about Bollywood (or anything you care to talk about), is very knowledgeable about books, movies, web series. Knows people, is very generous. To top it all he sings so well as we found out on the Hampi trip - English, Hindi. There's not a dull moment with Piyush around. I enjoyed my walks, my talks, take his advise seriously and am really keen to watch his movies over the weekend.

Piyush and I spent all our writing time in the Board Room. It was a place for the backbenchers - we'd head off for chai every hour, play music loudly and do all the things writerly chaps or creative chaps don't do. And we were okay with that. Like I told Piyush, a lot is owed to his approachable and amiable character - if he had been stuck up about his accomplishments - the entire retreat could have turned out differently!  He was there at the morning walk and last to go to sleep at 11 in the night. Good fun Piyush. Like you say, PBC.