The Invite
"There's a 10 day Writer's Retreat at the Jindal township near Hampi. I would like you to come,' says Sathya on the phone. 10 days? Away? Writers? This was scary. What if they find out I am not a writer? What do real writers behave like? What if I find out I am not?
I kept quiet.
Gently she said. 'You will like it. Come.'
When someone says Come like that I cannot say no. I said yes. Not knowing what it was about.

I asked the two women in my life - Shobhs and Anjali. Both felt I should go. Maybe they needed a break. So, go it was. Rescheduled stuff. 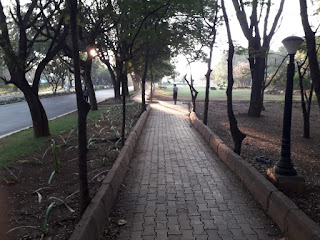 Day 1 - The Journey
On the 13th I got to the RGIA airport at Hyderabad. Wandered about. Checked out my co-participants on the net. Piyush Jha (could not find him initially but he had directed movies, written books, done a lot), Nimmi Raphel (performer, director, playwright, Adishakthi from Auroville, Pondicherry), Brandon Damian Ingram (actor and author, Colombo), George Mathen (artist, graphic novelist, from Bangalore), Sharon Irani (poet, editor), Shubra Krishan (writer, travel and cookbooks), Chandrahas Choudhury (most literary of the lot with 3 books, known personality, I went to his book function for his highly acclaimed Arzee the Dwarf in Hyd with Vinod), Vishakha Jindal (artists, designer), Shireen Quadri (writer, editor of Punch magazine)

Saw Sathya who was talking to Nimmi. Saw Piyush and Vishakha in the background. Hopped on the flight and off we went. Five from Hyd. From Bangalore George, Chandrahas, Sharon, Shubra. Brandon was already in his room. He came a day early.


At the Vidyanagar airport which nestles between the Jindal steel plant which at 18 MTPA is one of the biggest steel plants in India, we hopped off. We were welcomed by Rajsekhar and got on to a minivan. In 10 minutes we were at the Hampi House, nestling inside a very welcoming and promising green township. We passed the Hyatt where Shobhs and Reena and Ramani stayed on their way to Goa for their rally. Nothing to complain so far. The township looked awesome.
The Hampi House
This is where we would stay. 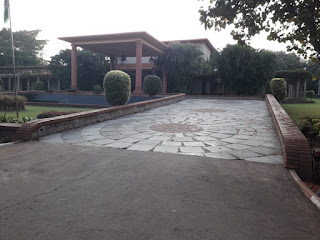 A lovely place with a restaurant 'The Convertor'. Superb design everywhere - blending in with the Hampi architecture, with nature. 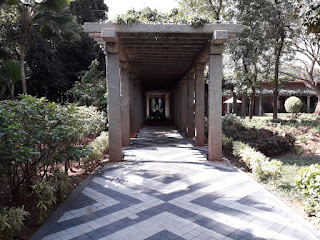 Headed down to eat lunch. After a spot of lunch we sat at the lawns and hung about till tea time. After which the Bangalore crowd came in.
More talk. Then Sathya led us on a small walk - along green lawns, past a well-designed museum and to a small man-made lake with ducks.

Dinner.
Piyush does not want to sleep in early. Most others seemed fine with heading back. I stayed back with Piyush and George. Both had all the traits of backbenchers - my types.

Tomorrow we will be shown the place - taken around. Not a bad idea.
Definitely, need to check out the place - walk around perhaps.

Plans made. Was not a comfortable night. What lay on the other side?

Writer Profile No 1 - Sathya Saran, Editor, Writer, Curator
Featuring Sathya, the curator of this show - 'Spaces Between Words' - The Unfestival. Sponsored by the JSW Foundation, part of the 13 billion Jindal group. The JSW Foundation is headed by Ms. Sangita Jindal whose taste and love for all things old and beautiful shines through her work. Sathya got this idea of an Unfestival she said, one night. Most writers are disillusioned by lit fests and their pecking order and stuff and there is enough literature on lit fests already so I can totally get it. The idea was to get 10 writers of different genres together, curated by Sathya, get them to spend time together, let them absorb Hampi and Vidyanagar, and perhaps if they are inspired, get some creative output located in the environment. Wonderful idea and I loved the way Sathya held back from giving too much information -she let it flow as it should. 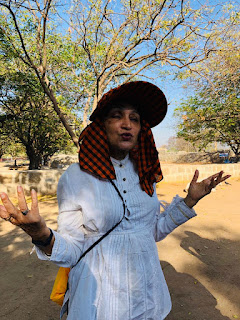 For the uninitiated, Sathya is a much-accomplished lady. As editor of Femina, India's first women's magazine, for 12 years, she is well known. She won several awards and has written books - bestselling autobiography of Guru Dutt, biographies of Jagjit Singh, S.D. Burman. 'Night Train and Other Stories' and a book on Gulzar's 'Angoor - Insights into the Film. She also wrote one on how to become a beauty queen or something like that - Femina definitely was involved in the Miss India shows - they were called or probably still are Femina Miss India. As consultant editor of Harper Collins she brought together this marriage anthology last year 'Knot for Keeps' for which I contributed a piece on my own marriage titled 'The Imperfect Marriage'. Sathya teaches at NIFT, writes and edits books, consults and does many things.

For all her accomplishments, Sathya comes across as someone who had found the perfect balance. She has a childlike enthusiasm for everything, has tremendous energy and grit and when needed, can be firm and decisive. She does things just right - economy of words, actions and I think is a perfect teacher and mentor. The kind who does a lot without seemingly doing anything. Sathya has this signature plait that reaches her knees, has a terrific sense of fashion and has this Hyderabadi connection - she studied in Nizam College!

As for her writing, she is very diligent. Does not waste a moment, produces different material copiously. Every day, she had something to read. Her commitment to work was something to learn. More on her in later posts.