Went to  Beauty Green with Vasu today and decided to buy some rice and biscuits for the family and check in on the two. When we first went the gate was shut and no one was opening it but through the crack I could see the two -Sona and Zor - lying regally in the ground. 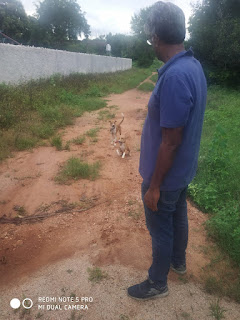 I went with Choudary after sometime and this time the man was around - he was outside with his four year old. The two pups were out two. They saw me and came running - Sona went into her usual wriggly poises while Zor maintained a safe distance. I noticed that Sona's leash was off and Zor's was on. When I asked him he said Sona was more free and playful while Zor was still scared. I asked him to remove the leash from Zor as well so she won't get stuck somewhere. He did.

The two however stayed their distance. I gave the biscuit packet and the kid gave them the biscuits which they gobbled up. They fought with each other playfully as they did at home. The man said they now stay with them inside their room. They looked comfortable - like a family. Apparently the kid plays with them. I finally felt happy knowing that they found a nice home. It's a young family and I know they have all bonded well together. The premises is large and there's a lot of open spaces around.

And hey, they got new names - Sona is Tommy and Zor is Jimmy! Though they don't respond to any name anyway.