V starts with a communal riot - or rather - a riot. We see a supercop saving lives and beating up some bad guys dressed in black and getting awards and featuring on magazine covers et al. Then comes a gruesome murder of one of his colleagues along with a message stuck to the victim's forehead challenging supercop to catch him. The killer goes on murdering people in rather unpleasant and messy ways (mostly to do with blood gushing out from severed arteries etc - think chickens being slaughtered and you get a sense) and leaves notes each time for the cop, taunting him, leaving him riddles etc which te cop solves with his new love interest, a psychology student who is writing a crime novel (and whose family appears to need some urgent psychiatric help before they murder one another intentionally or otherwise). By the second half we know that the murderer has a back story too - like they all do. In one final twist, we also know that...there is an item number right in the end. 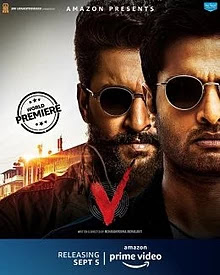 Posted by Harimohan at 6:25 AM