Where is The Friend's Home - Movie Review 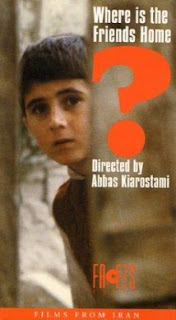 That evening the boy's close friend Ahmed realises that he has taken that boy's book home by mistake. He also realises that his friend could get expelled if the notebook is not returned to him. So the ten year old sets off without telling his parents to the next village to return the book. The young boy has no idea where his friend lives and has nothing to ask for except his name. No one helps him and in the end he finds an old man - perhaps the only person who listens to him properly - and tries to help him. However despite all efforts, the boy does not find his friend and returns home after a heroic effort.

The next day the boy who has misplaced his book realises he does not have his book. All other boys have come to school except for Ahmed who may be tired after his exertions while he tried to return the book. The teacher starts checking the homework and once again threatens to expel anyone who makes the same mistaken more than three times. Just as he reaches the boy who has lost his book, the young hero comes, a little late. He slips the note book to the owner and tells him he has done his homework as well. The teacher checks the notebooks and finds a dried flower - gifted by the old man.

Heroes are made of such stuff. Irani movies are brilliant in the use of metaphors.
Posted by Harimohan at 2:32 PM