I was invited by the TIE (The Indus Entrepreneurs), Hyderabad Charter to speak at their Charter Member Social on September 20, 2017 by the President Pradeep Mittal. Many friends are part of this elite group so it was interesting to share some experiences with a group pf achievers. Suresh, Srikanth, Anil, Venu, Kali were some of the friends I met. 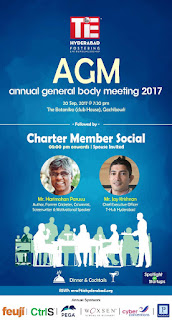 My talk followed that of Jai Krishnan, CEO of T-HUb.
----
I spoke of the three questions that bothered me.

What defines me?
Each time someone introduces me I feel embarrassed because my introduction is long - cricketer, writer, coach, speaker, workshop facilitator, teacher..a list that clearly shows I do not know what defines me yet. I am not the expert in any one thing and it bothers me that I cannot define myself more clearly and sharply than this vague jack-of-all-trades description.

I was with Suresh the previous day and he asked me a question? What was your best performance ever in cricket? Of all the games I played over the two decades I was active I picked this one game. Clearly we are defined by our choices so I guess my choice explains a bit of what defines me. 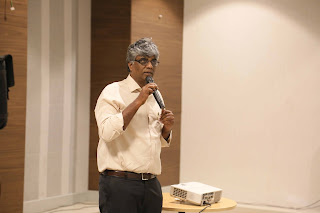 This was a match we played in the 1980s. We were part of a strong Under 22 side representing Hyderabad with about 8 Ranji Trophy probables. Ehtesham, Masood, Swaroop, Suresh, Zakir, Rajesh Yadav, Venkatapathi Raju, me, Chatterjee, Charavarthy all went on to play Ranji Trophy from that squad. It was a team that was  expected to win the championship easily. I guess we thought we would, somehow or the other.

We had an easy first round. Then we played Tamil Nadu in the second. Not the toughest side compared to us but no pushover either. We managed 420 batting first, not a match winning total but good enough. Tami Nadu replied strongly on day 2 with 190 for 1 or something to that tune. A mere 230 runs with 9 wickets in hand. And the openers were playing really well. None of the bowlers had taken responsibility on day 2 and we perhaps had hoped someone would strike. None of us did.
It was an uneasy night. We had given away the advantage. In fact Tamil Nadu had their hands fully around the match. But how could we, a champion side, lose? Our collective pride was at stake. The mistake had to be reversed. We had to walk into their den and wrest the game away from them.

Personally I was upset with myself and wanted to make amends. I believe we all felt the same way.
Next day my skipper Ehtesham looked at me as we walked into the field and told me 'Harry, I want you to dry up the runs one side.'. Our plan was to tighten it up and make it difficult for them to get those 230 runs and hope to get wickets along the way. I was game for the task. Grateful actually. 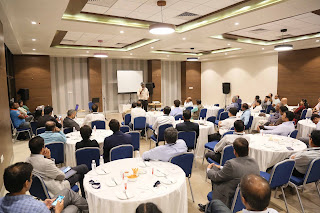 I bowled a spell I will never forget in my life. I bowled unchanged through three sessions bowling 22 overs of fast accurate bowling aimed at a  run denying length. If I beat the bat, the ball would miss the stumps by six inches or so. Cricket, like all games, is a game of angles, and I chose that length and stuck to it all 22 overs. It paid me back. I gave only 28 runs in those 22 overs. It was a superhuman effort, normally a fast bowler would bowl 10-12 overs at a stretch. Not one ball did I try a wicket taking length because all they would have needed was one boundary to break the shackles and we might lose the advantage we secured.

By the time I was taken off, some 40 odd overs later, they were some 290 for 2, an hour after lunch. Then they lost two more wickets before tea. In the last two sessions, in the fading light at KSCA, Bangalore, Venkatapathi Raju took six wickets. Rajesh got three. We walked off after one of the toughest battles of attrition I ever played. I had no energy to celebrate. Just this satisfaction that a wrong had been righted. For a moment I wondered what I had to show for those 22 overs - nothing. But I was glad our team had won.

As we clapped our heroes out, our manager C.R. Chandran sought me out. 'You know we would not have won but for your performance right?' he said. I thought he was being polite. But four days later a fast bowler who got a mere two wickets in three matches made it to the South Zone squad. In fact my manager said I was a unanimous choice, one of the first names to be penned down by the selectors.

Wicketless yes, but I would do it any day for my team. I felt that I could only deliver that because I was driven by the bigger purpose of my team and its pride. And I struggle to explain this idea sometimes that we perform beyond our normal capabilities when we have a bigger cause, that we get rewarded big time and recognised when we pay for a bigger cause. Nothing explains it better than this choice for me. Of that length I bowled, of the choice I made. I'd do it any day. And I'd pick that performance over my seven wicket hauls.

The second question that bothers me is this.
Why did you not play Test cricket after playing Ranji Trophy?
For twenty years after I got dropped from the Ranji Team I believed I was a victim of politics. But ten years ago when I asked myself the question, I knew the answer - I was relieved to be dropped. I did not want to play. Mainly because I was not bowling as well as I did the previous year. I was ashamed that I was not doing well enough, I had no way of going to anyone and asking what was wrong. I was a first class cricketer, how could I ask basic questions like how I lost my swing, how I lost my pace? And I slowly faded away because I was too frightened and egoistic to ask someone to correct me, to help me. All it would have taken for a good coach would have been half an hour with me in the nets since I already knew a lot of my craft.

I had made it to the top 60 fast bowlers in the country, maybe even into the top 30 and I just let it all go when I was so close to the next step. I believe a lot of us do that, get so close and then give it away because we are too proud, scared to ask for help. I was certainly driven by fear - of being found out, of not being good enough. And I let the entire story collapse around me. Now when I look back I know exactly why I did not make it to the next level - because I could not stand my ground and find answers. If I had just stood there long enough and stared into the darkness I would have found solutions. I would have made it to the next step. But I was too scared and gave up too early.

The third question that bothers me is this.
How come you did not write a best seller yet?
I have written four books and god knows how this journey has been. I chose to write despite not having any training for it, not having any specific skill or connection, just the mad feeling that I enjoyed the writing process and that I could do better than a few writers that I had read. It took a long time to write my first book, one lakh fifty thousand words, and it never got published despite making the rounds of several publishers. It took me a long time to figure out that perhaps I was not good enough and it was not the publisher who was at fault. Then I wrote another and then another. None got published. It was my fourth novel, funnily, a story about cricket, an area I was keeping far away from, that finally got published first and even made into a movie. Then I wrote another and then another and another. Now with two fiction books and two non-fiction books behind me, I do not know how to answer that question.

How can I write a best seller? I don't know. I can only write what I know about and I stick to stuff I believe in. I have enough themes and enough stories to write about and I will write about them. I do not know how a best seller is written. But I know one thing for sure - I will not step away like I did with my cricket before I find the answers. I will stay and peer into the darkness seeking the formula. I may finally never end up writing a bestseller but at least I will not give up without trying.

That is my formula to go to the next step, which is what this talk was all about. To persevere, to look into the dark despite the fear, that perhaps you do not know the formula for getting there. I believe that if we stay there long enough and look into the darkness, we will find light, the formula.

-----
A few questions and answers and we were done. It was a lovely evening. I could not stay longer because I had an early flight to catch next morning. Thanks TiE. Thanks Pradeep and Suresh.

Very Inspiring sir. I'm glad to listen to more of your cricket stories.

"I will stay and peer into the darkness seeking the formula. I may finally never end up writing a bestseller but at least I will not give up without trying."

These lines are worth quoting and recalling whenever needed a support sir.

Hey Abhinay, I did not write about the inspiration behind the talk though I was tempted to -those wonderful chota samosas and coffee we had near the DLF building minutes before the talk. As always you amaze me by picking just the right line. That is the gist of the talk I feel. See you soon. :)