It's based on a novel. Tomboy (girl - Kirti) in Bareilly is not getting married - because she is a tomboy. So she decides to escape the small town. But she finds a book on the railway station 'Bareilly ki Barfi' and finds that the heroine of the book is exactly like her (smokes, watches English films, does break dance). So she returns to find the writer. The writer is a printer (Ayushman) who wrote that book in memory of his ex-girl friend who has since married someone else and moved on. 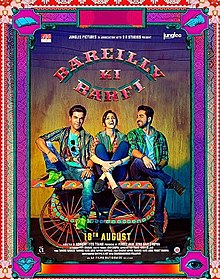 Of course he does not want to tell the world that he wrote the book because then his ex would be exposed. her that he is the author so he makes a fall guy friend (Raj Kumar) of his the author - with his permission of course. (Hasn't he heard of a pen name?)

Girl starts writing letters to the author and gives them to the printer who in turn writes letters back to her and gives them as letters written by the author. Now girl wants to meet author because the letters have really got the heat going. Printer decides to have her meet the author. The key is that the non-author must behave in  a fashion that puts off the girl. The non-author is a very docile character whom they transform into some bhai type of a guy.

Bhai expectedly wins her heart - instead of putting her off. Also scares the printer away. On marriage day all is revealed. Don't let me give away the suspense.

Nice in that small town sense. But the characters did not make much sense to me. Rather inconsistent. And no big guiding emotion that led the film. But that said, I like these kind of movies.
Posted by Harimohan at 3:06 PM