A talk for four hours, on how to motivate teams and individuals through tough teams, using cricket analogies. 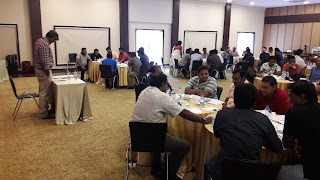 Why me - My experience with winning teams
I was part of winning teams when I played - at various levels, a little more than what normally is experienced. We won every level - Under 15, Under 19, Under 22, Under 25, Buchi Babu, Subbaiah Pillai, Ranji Trophy, Inter varsities, Vizzy Trophy. So I understood some dynamics.

Losing teams characteristics
But before winning, I was very familiar with losing. I understood what was called bad dressing room atmosphere. I asked the participants to name some characteristics - insecure spaces, everyone for himself, no trust, no inspiration, low morale. We lose and sometimes we win, by chance. Or because the other team played worse. 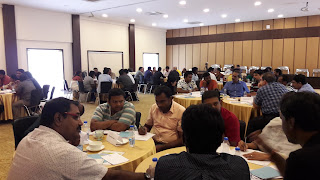 Change - A Product of Losing Over and Over
After losing for a long time, one gets sick of losing. Change happens in two phases - one at individual level, and another at team level.

Personal leadership - I Will Do It
Until then I looked at others to help me win. Then I decided one day to put an end to this. I will make a change personally, even if the whole team did not cooperate. I owned my space, decided and created a victory on my own. I thought it, planned it and executed it. I expanded my role and did the unthinkable. As a Number 10 batsman who had not even scored a 50 till then, I went and scored 158 in a big run chase as an opener and won the game. I decided first, then found a way to achieve in an error free manner. I did it. We won. I knew I had created this moment. By design. I felt I could do anything.

The Team - We Will Do It
Having got used to winning I began to set my sights higher. Now I did not just want to win a match but a whole tournament. Which means I definitely need the whole team with me. I cannot do it alone. So when we went to play Inter-varsity cricket for Osmania University we first shared the vision for the team. We asked for help and sought the team's cooperation. Together we decided to go for it. We could not do it without their help. There were serious team meetings, everyone contributed. Now that the team was bigger than me, I even offered to bowl second. We won game after game, celebrated and then put our heads down until we won the final. Not surprisingly I was the top wicket taker for the tournament, but that was hardly an issue. All that mattered was that the team won. I had promised my captain that I would help win and we did it.

We watched a lovely video of Arnold Schwarzenegger telling us that the self-made man is a myth.

Higher purpose - Bigger and Outside of Us
Why did we win? What made me sacrifice my ego and my survival instinct? What made me run every single run like my life depended on it? It was simply because the purpose was clear - that the team comes first. And our glory lies in the team's win.

Impact of Putting Team First On Personal Performance
Funnily, when I played for the team and not for myself my performances were the best. My best performances in tournaments – league championship (45 wickets), Inter varsity (14 wickets), Vizzy Trophy (12 wickets), OUCE (169 and 5 wickets). Because the team was first I could go through pain, injury, used myself best. The purpose, the bigger purpose outside of ourselves is the best motivation ever.

The magic formula for motivation is just that – the why is so important – the team is greater than us. The team is here to win and we will do all we can to make it win.

We watched the TED Talk - Start with why – Simon Sinek

Exercise
We did a short exercise as we tried to find the why. Eight teams worked together to come with a statement that explained the why.

Bringing About Change in Teams
We looked at the How - Process and Culture (values). In cricket I explained how we set ourselves a goal of winning the championship for the league championship one year. Then we picked the right people and dropped the wrong ones. Only the best team played. We developed a team culture - time to report, practice sessions, team meetings. The team was bigger than anything else - no reputation, no seniority, no pity. We invested in team rituals, we were fair and just with no compromises. We won. MCC - Winners 1994. 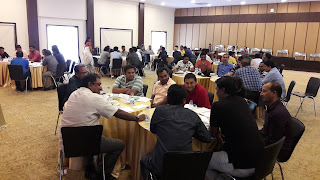 Some learnings About Leading
Apart from the How i.e. the 10x process (decided the end first and then work towards it) and the importance of team culture, we discussed a few things about captaincy. How a captain was best if he was a secure person - he need not know everything. He needs to know what he knows and accept that he does not know what he does not. When he expresses his vulnerability, the team steps in to help. He is interested in getting the best out of his team, so he invests in them, makes them feel secure and allows them to express themselves. He holds the space - does not control them nor does he let them loose without caring about them. He steps back, allows them to find their way, does not control, tells them what they need to achieve and not how, allows them to express themselves, listens, lets them feel in control, like they own their space. He builds a culture of pride.

Briefly discussed the Level 5 leaders of Jim Collins - approachable, vulnerable, asked questions, listened, loved their team members, invested in team, grew them, brought out their best. Level 5 leaders were known for their fierce determination to make the team succeed and for their incredible humility.. We discussed the window and the mirror approach that they were known for.

No one has explained TRUST better than Brene Brown in her talk - Anatomy of Trust
So we watched it.

Motivating Your Team – How will you do it? How will you make them want to do it?
Bring them together with a common purpose, a higher purpose outside of us, hold the space, challenge them, make them feel like they did it, let them do it but watch over them, come together, Like a FIST.

Recap and End
We did a quick recap and I realised that I had not planned as well as I should have - I had material for another two hours and I was just past the 4 hour mark.