Man is wounded and is being chased by two people intent on killing him. But before he can get killed by these two, he is hit by a motorbike and taken to a hospital. He survives. Another attempt is made on his life and he is saved by an alert nursing aide. Before the aide can tell the story of his heroics story to his pregnant wife at home, he is attacked and the wife kidnapped. The ransom - deliver the injured man. 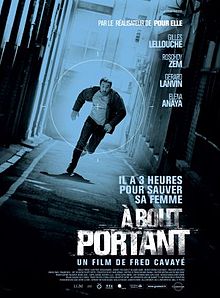 Meanwhile the police find out that the injured man is a criminal, a safe breaker. Even as they zero in on him there is news that the murder of a prominent man in the city is perhaps linked to this injured criminal. Now, both the injured criminal and the nursing aide become fugitives as they escape the cops. The action is relentless as they try to find the one piece of evidence that can save them and expose the truth. Can they save themselves again cops who are not willing to listen to their story?

Edge of the seat stuff. So much happening that you miss some angles but that's ok. It's worth the exhilaration.
Posted by Harimohan at 2:19 PM