Jasper Industries - The 10x Workshop and the Winning Mindset

A day long program on 'The Winning Mindset and Achieving 10x Performances' was conducted on September 2, 2016. About 20 of the top management of Jasper Industries attended the program with Sumanth and Srikar. We did the program at MLJaisimha Academy, keeping it cricket-based instead of classroom based. Everyone landed up in their track suits.
The brief was to understand the winning mindset and achieve 10x performances individually and as a team.

We started with a small sharing of everyone's personal favorites - movies, books, meals, people, heroes etc. One of the ideas was to break the ice between the participants and bring some element of vulnerability and trust.
Facing Brutal Facts
The teams looked at the brutal facts they were facing as a company - current situation and the challenges that were threatening the company on a day-to-day basis. We listed them. 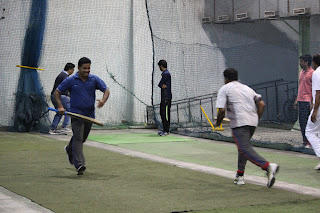 Cricket Game - Revised targets
We played a  short cricket game with tweaked rules where the second team was given a doubled target (like DL) and asked to chase it. We discussed the possibility that such things happen in life - circumstances in life are not always fair and we must be prepared for a 10x challenge sometimes.

Then we wondered if we could overcome such challenges where we need to come up with 10x performances. We decided it was possible We saw videos of such performances and analysed them.

Simon Sinek - Start with why
Then we looked at how to make such efforts sustain. The Why. So we looked at Simon Sinek's 'Start with why' (unfortunately it did not play so I had to give the gist of the golden circle"). The teams tried to find a why - a cause, a purpose, a belief - that drives their effort. Something bigger than them, something outside of them.
How
Now that the why was attempted, we looked at the how 10x can be achieved. 10x Process and the way we played - i.e the 10x Values.

10x Process - The 10x Ball Game
To understand the 10x process we played a ball game where we proved that with creativity and team work we could achieve the impossible - 10x. We cannot do it by doing the same thing - we needed to think out of the box. Another important factor is that here the target was preset - we first set the target and then found ways to achieve it. It was important to try all perspectives, to not give up and to work like a team.
10x Values - Practicing the IDOL
The 10x process works for individuals and team. Similarly we also looked at one more how - the culture of the company. Jasper already had a strong values - but were they being practiced. The IDOL - Integrity, Dedicated team work, Ownership and Loyalty to customers - pretty much encompassed every thing. We looked at where we fell short and decided that the gaps would be addressed. The culture has to be non-negotiable. If the seniors flouted it a bit - the people reporting to them will do it much more.

If the core values are practiced with the spirit intact, the leakage will reduce by 50%.
Cricket Game - 10x Rules
We played the second game of cricket and with similar rules as the first.

The What - The 10x Results
Then we looked at the what. What does Jasper want to achieve as a team. The groups sat and made team targets. Sales, Incentives and Customer rating. Then each individual committed to the team pie by adding their commitment. They committed individually and asked the rest of the team for specific help to achieve the targets.
The Jasper Story - Visualising and Creating Happy Endings
In the end we wrote a story - the Jasper story. the beginning in 1965. The growth. The problem and the slow down. Then we looked at the ending and decided to create a happy ending. Having written the ending down first (as in the 10x exercise), we found the ways to get there.

How each of the team members would get affected by the end result was discussed and shared.
A group picture and we ended the day. It was a good exercise that captured a lot of data and intention. However like all exercises it must be sustained through regular and frequent inputs, however small. It depends a lot on how the seniors drive it.

Thanks Jasper, MLJaisimha Academy, Sagar, Abhinay, Ann and the staff.
Posted by Harimohan at 11:28 PM