Arjun Reddy is a man with his own rules. He lives life like Virat Kohli lives his cricket - full blown intensity that does not diminish ever. He has anger management issues they say but I feel he probably has very firm ideas on what is good or bad and mostly cannot understand that there are other people around who also seem to have their opinion of good and bad. He is also very organised in his mind in one way, like topping exams, and very disorganised as in not understanding simple connections which gets him into trouble most times. 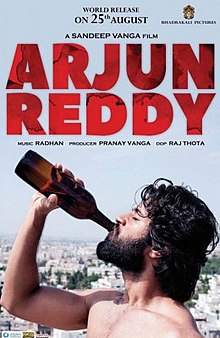 The doctor to be falls in love with a new student in his medical college. He likes her, so no one else can claim her else...No one has a say in the process, including the girl. She seems quite happy to be saved from ragging thanks to the rather influential Arjun Reddy Deshmukh. Of course there is a price to pay like being kissed by him, manhandled by him (he loves her and she is his) and stuff like that. He takes her along on his bike everyday and it develops into what would naturally develop between young people. Anyway they are in a relationship in every sense of the word. Except for another equally deranged character called Amit, all else is fine.

In a rather complicated series of events, the girl gets married in the space of one day (she cannot say no to her parents), the boy gets hooked to morphine and also manages to get himself kicked out of his home. He sinks into alcohol and all kinds of stuff to escape the pain. And in the end he finds her and they get married - she is pure after all. Left her husband and is actually pregnant by Arjun who was her only one. So the family gets together.

Vijay Devarakonda is intense, good looking and complete hero material in a superstar sense, and takes the film to where it gets. His friend Dr. Shiva is an able foil as the perfect friend. Well crafted and written and made with a lot of care and love. For the effort and the honesty, Arjun Reddy worked for me. Would I see it again - no. It's too intense.
Posted by Harimohan at 9:58 PM