The President of the USA is caught in a sex scandal days before the election. A fixer (Robert De Niro) is brought in. What can take away people's attention from the sandal? A war he says. With Albania. But we cannot go to war say the officials. Not real war, he says. We will distract the people with the war story for 11 days until the election is over. And by the time the election is done, the public should love the President again. 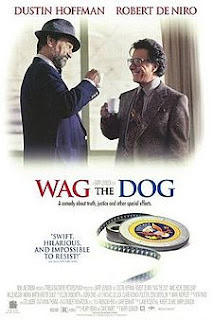 Who can tell such a story so convincingly? A Hollywood producer (Dustin Hoffman). So he gets his team of creative people in and designs Act 1, with a young girl fleeing rape, murder and destruction in Albania, complete with a song. Then they design Act 2 with a fictitious soldier left behind in Albania and how they need to bring him back, this time with symbols and songs. Then Act 3 when the soldier is finally brought back home triumphantly (but dead) owing to some technical glitches. In the eleven days, the fixer team fully tells a fake story to the public and gives the President a thumping victory.

But his best creative work will never get recognised as a piece of art and the producer is upset. Well there is no room for upset when the stakes are high. He joins the soldier the next day. There is also real unrest now in Albania but what the hell, the President won the election didn't he?

Brilliant is the word. You have to watch it many many times to catch the superb writing flowing off sleekly from every scene. And an ensemble cast led by De Niro, Hoffman, Anne Heche, Woody Harrelson, Kirsten Dunst and so many others  Watch.
Posted by Harimohan at 11:58 PM