I was back on the road, despite wondering if it was worth it, doing Hyderabad and Pune in my Santro. The journey to Pune from Hyderabad was last Sunday, August 29, 2011, which was eventless - no traffic jams, no heavy traffic and I sailed through all the bottlenecks on the road pretty smoothly. The road was as good as it an get in the rains - Hyderabad to Solapur was in five hours - started at 530 am and reached Solapur by 1030 at a steady clip. No major bumps, and at 80 kmph, a very smooth ride. 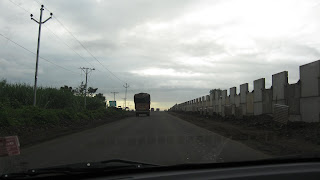 I broke journey at Nisarg, a new restaurant that comes up 15 kms after crossing Solapur, on the right side of the road. He has some hot tiffins that include idli, vada, sabudana kichdi, sabudana vada, a heavy plate of puri and bhaji which is a solid meal in itself, shira and some other stuff which he makes well. The service is good and fast, there is ample parking, a loo as well and is generally among the better ones I found in these parts. The other joint is Athithi which is very clean though the service and range is rather limited and this comes near Tembhurni. Solapur to Pune took me 5 and a half hours or let's say five because I travelled right across Pune. I was at Hadapsar at 4 p.m. which is good going on this road. 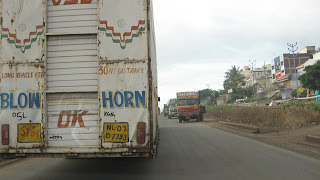 The whole week it rained madly in Pune, so bad that I feared the roads would get washed away. The sky was as dark as anything I had seen, the rain incessant as it can only rain in the western ghats. So when I was planning to head back from Pune to Hyderabad I was really apprehensive. I checked out all alternative routes and the best seemed to be the Saswad-Jejuri-Nira-Lonand- Phaltan-Pandharpur-Mohol-Solapur. But after much debating I decided to stick to the highway.

Started off at 545 am which was maybe half an hour later than I would have liked. But it was a Sunday morning and thankfully the heavy traffic was missing. But the rain slowed me down considerably for the first hour or more. The toll road just outside Pune is a good way to get off on a long journey and those 30 kms were a breeze and an indicator of how wonderful life can get once the four laning gets done. The next part is when the four laning has begun but only one side of the road is usable - so you keep shifting from one stretch of the road to another after every few kilometres. These roads are in good condition, wide, and have enough space and those few kilometres can be done swiftly, though one needs to be careful at the diversions. But comfortable. After that stretch is when the road narrows up and you can get held up in jams. I held my breath for bad roads, traffic jams but went through comfortably again. The first railway crossing was open, free, no jam. The narrow bridge that comes someplace after Bhigwan was empty and I just sailed past. The narrow roads were empty. The last railway crossing on the other site of Tembhurni was open and there were no traffic pile ups there as well. I was at Solapur by 1030 a.m. which is as good as it can get on a rainy day, on a road that is under construction. 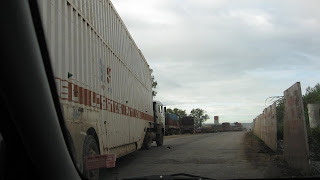 The road from Solapur to Omerga is decent and one can do a pretty good pace here. The Karnataka roads are wide but the rains have taken a toll and there are a few potholes which slow down the pace. The Andhra Pradesh road which was in brilliant condition also has suffered a bit with the rains and has some potholes but nothing that is bad. It is all very very motorable, no bad stretches that warrant a second think. If one gets past the narrow roads between Bhigwan and Tembhurni, one is pretty assured of making it in 9.5 to 10 hours doing a decent speed of 70-80 kmph. If there are two factors that helped I would say one was the Sunday morning which probably accounted for lesser heavy traffic and the early start which allows one an easy getaway from the town. 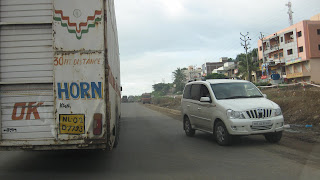 Anyone who is thinking of a road trip on this route and is worried about it can be assured that it is mostly in good condition and perfectly motorable. I have sen some comments on team bhp and to answer a few (1) the distance of 550 kms can be done by a solo driver easily especially if one has done it before (a good night's sleep and an early start should do) (2) it is not really the death trap that it is made out to be if one drives sensibly and does not drive at high speeds, overtake blindly, driver is properly rested etc which I think are bigger causes of accidents than anything especially since the road conditions do not allow for excessive speeding. There are enough joints to stop by for a tea and a bite and it is pretty comfortable. I do it alone, and never had a problem. If there is one thing I would advise it would be to drive during the day because the roads in the Maharasthra section are narrow and winding, many parts are under construction, and there are a few sharp curves one needs to watch out for. If night driving is a must, be sure that there are two drivers at least and take it slow and careful. Happy driving!
Posted by Harimohan at 11:16 PM