I was visiting a dear old friend of mine, one who never ceases to make me laugh so much that I sometimes think I just might not be handle it, (many times just a step away from rolling on the floor), and one whom I always love to meet for this one wonderful quality among many others. The handsome, debonair, extremely charming, energetic and funny, Sunil Kumar Jyoti and I have known each other for almost three decades now, since our Engineering College days where we, along with a bunch of other friends tried to balance many things – academics, sports, growing up - with varying amounts of success. And had great fun doing it! 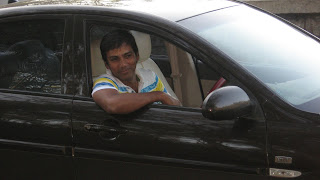 Sunil was a national level badminton player and was far more passionate and committed to the sport than the rest of us were and was always away on tours or in practice camps. Between his busy schedules he would make it as often as he could to the college, always immaculately dressed as he is till date, his bike in perfect condition, every bit about him in seemingly perfect order. We shared much in common including the sports quota we both got our admission from – he from badminton and me from cricket. We loved listening to music and spent many hours discussing and exchanging music. He introduced new music to me, stuff which I would not have listened to much otherwise – Cat Stevens, Super Tramp, Fleetwood Mac and others. Sometime during that phase we also discovered a shared sense of humour, one that not many others seem to enjoy because we go off into uncontrollable bursts of laughter at the weirdest things and the rest of the people in the room are looking on thinking – what’s so funny? I love those times.

Anyway we visited him at Hubli, Shobha, Anjali and I, where he is now stationed with his wife Poornima and older daughter Tanvi. Badminton has now been replaced by golf, his new passion, which takes up many of his waking hours. He is a senior officer with the Railways and enjoys his life. And when we visited him he decided to show us the Tibetan settlement in Mundgod, which is close by. I had been to the settlement in Dehradun, the home of the Mindrolling Monastery, but it was nothing like this. 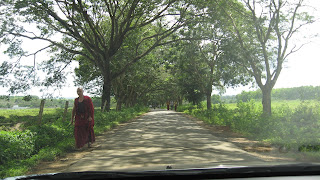 Mundgod is about 45 kms from Hubli, a picturesque drive through some of the quaintest villages that seem to have been frozen in time. As we reached the entry to the Tibetan settlement I found a change in atmosphere, in the setting. Tibetan monks in their maroon outfits walk along, little huts with Tibetan snacks and tea sprouted about, and acres and acres of rolling fields. The Mundgod settlement is spread over 4000 acres, has 11 villages, each headed by an elected head, has 7 monasteries and houses about 18000 Tibetans making it the largest Tibetan settlement in India. From the slight disorder that we pass by in the Indian villages, we see a sense of order and discipline, nothing much, but ever so slightly you sense the peace, the order in this land. Even in the fields, the neat houses, the intricate monasteries, you sense that order and peace. 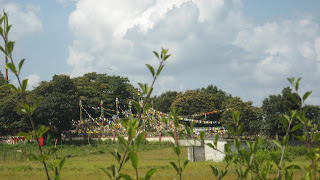 This settlement is known as the Doeguling Tibetan Settlement. The villages of Drepung and Ganden in this settlement are reserved exclusively for monasteries. The seven monasteries are Ganden Jangtse, Ganden Shartse, Nyingma, Drepung Loseling, Drepung Gomang, Ratoe and the Kargue Monastry. The Doeguling Monastic University is a replica of Tibet’s 500-year-old Doeguling Monastic University (destroyed by the Chinese in 1959) and trains monks in Mahayana-Buddhist education. The settlement also has schools, colleges, hospitals, homes, co-operative societies and is self sufficient. Most of their ancient cultural traditions seem to be alive in these settlements. 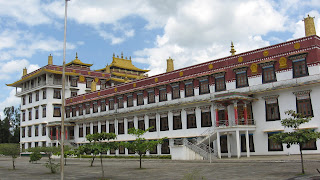 We drove past a few villages and entered the monastery of Drepung Loseling. It is huge ornate, highly impressive structure set amidst rolling fields all around. This is apparently the new assembly hall of Drepung Loseling monastery, a place that can hold more than five thousand monks. It had been inaugurated by the Dalai Lama in January 2008. The study hall here is very large, with paintings of all the Buddhas, a gold throne and a life size replica of the Dalai Lama. There was an examination going on for the monks so we sneaked past the monks and had a quiet look around. The place teems with young monks, all in the age group of 20s and 30s and their lifestyle and commitment to their education impresses you. It makes you wonder and makes you want to learn so much about the Tibetan way of life. Their monasteries, their monks, their teaching, their learnings, their lifestyles, their hopes and aspirations. What is their future? Do they still dream of a life back in independent Tibet? How long do they wish to live in this suspended fashion? What is their future? Once cannot help but feel for the peaceful monks. 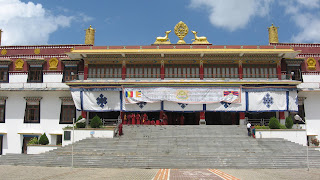 What happens in these settlements? The Tibetans have been careful not to let their learning, culture and tradition go waste. Their monasteries serve as universities and several subjects like Buddhism, Tibetan medicine, English, Mathematics and Science are taught. Students go through sessions of debates, discourses and recitation and have an elaborate amount of Tibetan knowledge to imbibe. Even reading about it on the website is mind boggling. Apart from the education of the monks and preservation of their culture, it is obvious that the community thrives on agriculture as is witnessed by the green fields all around. Why do these fields seem greener than the fields outside the settlement? There are handicrafts, shops that sell some Tibetan stuff, small hotels etc where one can try momos, tea etc. 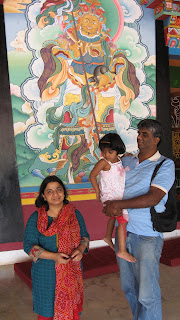 They are quite friendly. You smile at them and they will give you a peaceful, big smile. You can walk, drive through. We missed the Gaden Jangtse Monastery for want of time. Maybe the next time when I have a day or more to spend there. It certainly deserves more than a day. 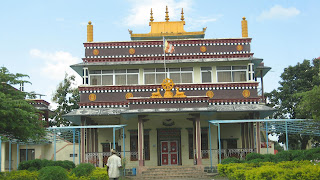 The colorful flags, the sparse lifestyle, the peace that pervades these places cannot hide the discontent and sense of disorientation that the Tibetans might be feeling. It is more than half a century since Tibet has been occupied by China, which is growing stronger in the world order, making their claims for a free Tibet feebler and feebler. We saw pictures of the two Tibetan students who immolated themselves to free Tibet recently. The Tibetans have a campaign of thumb impressions - in blood - that speaks for their cause. It seems like a faraway dream, free Tibet, growing further away in the wake of an aggressive and ambitious China we see today. I have no idea what the international community has to say about it but the reverence that the Dalai Lama gets speaks of what the world feels about it. But nothing concrete seems to have been done about it. 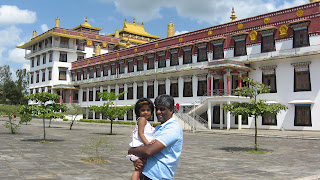 The Chinese army first invaded Tibet in 1949. In 1959 the Dalai Lama’s palace was attacked and he travelled incognito on foot for 13 days in hostile environment to escape the Chinese army. Ever since, the Tibetans have been in exile. In 1959, the Dalai Lama set up the Tibetan Government in Exile, the Central Tibetan Administration (CTA), now housed in Dharamshala. The Government of India gave land to set up settlements in various parts of India. Karnataka has five such settlements of which the Mundgod settlement, the Doeguling Tibetan Settlement, set up in 1966 is the largest. Today India has almost a lakh of Tibetan refugees living in these settlements.

It is a tragedy that people have to be dispossessed of their land. No people should be allowed to live in such conditions in this world that has seemingly come so far ahead in terms of technology and knowledge. Obviously we are losing sight of humanity in this process and love for other humans. No one has the right to take away what belongs rightfully to another, the real owners of the land. No one should ever live a life, feeling that they have never been a part of their land. It is a good thing that Mother Earth does not discriminate and accepts everyone of her children and nurtures them. It is when we ponder over these issues that we feel proud to be born in a country like India that has the patience, the understanding and maturity to welcome these friendly people, to let them live peacefully until they find their destination. Until then they will remain with us, among us, as part of the same human family that the good God made us. But whatever they choose to do, the Tibetans are a wonderful people and one must not let go a chance to meet them and see them in these little 'Tibets' they have created in the midst of all the pain and suffering they must be undergoing living in alien lands and not knowing if they will ever have a home to go to. A visit to their settlement in Mundgod is well worth it for many reasons! 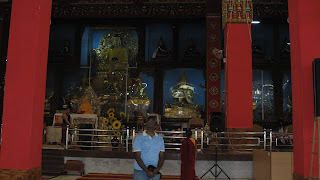 Mundgod- "God's Own Country?" Wonder how we missed going there, having lived at Harihar. We did go through Yellapur though on way to Karwar. The pics remind me of the Ladakh monasteries. Peace was an enduring feeling there too.

There are many places to see, visit and stay in those parts. I suggest we take a road trip in one of our longer breaks and explore those places some more. And now Topper lives right on the golf links which could be another attraction!

THANK YOU.WE COULD NOT SEE THIS PLACE PREVIOUSLY.AFTER READING ALL THIS, WE THOUGHT OF VISITING THIS PLACE AND STAY AT LEAST 1 DAY THERE TO KNOW IN DETAIL. CAN WE GET ACCOMMODATION IN MONASTARY PREMISES FOR 1 DAY.
M.KRISHNA RAO

Really nice article much informative �� Recently had been to Mundgod it is located just 40km away from my home town.Definetly you feel you are in different country��.I strongly believe no country could have done this.Proud to be Indian ��Proud to be a Kannadiga��