'Hamoun' is a 1990 Irani movie directed by Darisuh Mehrjui. The first review that says 'Daring...Fellini-esque' drew my attention and though I never watched a Fellini movie in my life, have heard so much about him that I watched it. 'Hamoun' reminded me so much of an Indian movie made in the 1980s. The protagonist actually has a hairstyle that is similar to Amitabh Bachchan's and he looks a bit like him as well. Among all Irani films I have sen this one seemed like it could have been in any country, especially in India. 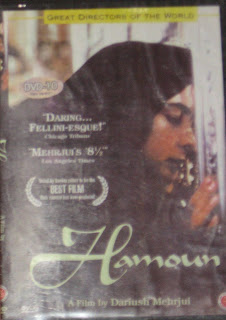 The movie opens with a dream sequence when many people have gathered at a function - a funeral perhaps. We see the hero Hamoun among the crowd and many of the characters we meet later including his wife Mashida. Hamoun, we understand later is an executive selling some equipment to hospitals and who has secret yearnings to be a writer. He is also working on his thesis. Hamoun, at this stage in life is having a tough life with the love of his life Mashida, now his wife and mother of their children, seeking to separate from him. She is a rich girl, a painter, who falls for the intellectual discussions of Hamoun, the aspiring writer, when they were young. But as they grow older she realises that Hamoun is not able to make any headway with his writing nor his thesis and takes out his frustrations on her - once even beating her up.

Seeing her life caught at a bottleneck she seeks to separate which Hamoun opposes. But she goes away and Hamoun cannot handle it. He becomes a nervous wreck, does badly at his job, blames his wife for everything, goes to meet his master Ali whom he fails to meet and goes to visit his grandmother at their ancestral house and gets a gun that his grandfather had. He tries to shoot his wife who is now living comfortably in another place and is seemingly happy, misses and runs away. The movie ends with us entering the dream sequence again, as Hamoun tries to drown himself by walking into the sea. He wakes up from the dream, rescued by his Master Ali.

'Hamoun' could be anybody's story and could be set anywhere. More than anything else it was this familiarity to India that caught my mind and those unforgettable dream sequences which are what make this film Fellini-esque. I wonder if my attaching similarities to India has anything to do with my watching a spate of Irani movies these days. In which case, do we as we grow more familiar, see things as what we have experienced? Interesting thought. Interesting movie.
Posted by Harimohan at 3:05 PM