Watched the 2002 Irani movie 'Marooned in Iraq' recently. It is most unlike all the other Irani movies - it is funny. However we realise that Director Bahman Ghobadi used the medium of a bickering family of musicians to show the ravages of war between Iran and Iraq and the bordering Kurdistan, which is not funny at all as we progress into the movie. In what appears to be a simple tale, Bahman Ghobadi, like many of his ilk in Iran, shows a lot. 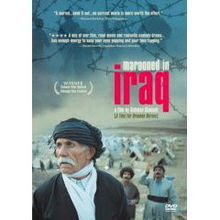 The film begins with a tractor trailer carrying passengers in Iran, across the border from Iraq. One of the passengers is a famous Kurdish musician Barat, the son of a legendary musician among Kurds, Mirza. Barat is wearing his trademark shades and sitting atop his motorcycle which is kept on the tractor trailer. He is scared of thieves and that is why he is not riding his motorcycle on the road! He meets a quack who makes tons of money treating people with fake medicines on the border. the quack loves war because he can make money. And Saddam.

Barat gets off the tractor and heads off to a place where his older brother Audeh, an Obelix-like character, lives on a brick kiln with his seven wives and eleven daughters, all who work diligently on his kiln. Audeh has promised not to leave women alone until he finds a wife who can give him a son. Their father Mirza is teaching young children music in an old container. Now Mirza has called his sons for a mission - they must go and rescue Hanareh, Mirza's ex-wife and the love of his life. Hanareh was a beautiful woman, a brilliant musician and singer, who married Mirza's former band mate and close friend Sayed and went back to Iraq occupied Kurdistan. Mirza's band disbanded after that and he moves to Iran. Now he wants to find Hanareh who has sent word to him that she wants to meet him - after twenty years - in an almost impossible mission. Audeh is not happy at leaving his seven wives alone and reluctantly moves on but he promises his wives he will get an eighth wife. All the wives want is a Kurdish wife.

On the motorcycle which has a side car, the family goes on in search of the famous Hanareh. Mirza is recognised by everyone on the road and most people also know that he is searching for Hanareh. Travelling through many villages, following many leads, getting robbed by thieves, losing their motorcycle and all their belongings they move on meeting people who guide them to Hanareh. The Kurdish people are unhappy that Mirza is not making music anymore for them. The group plays whenever they can and entertains the crowds in refugee camps.

The unmarried Barat finds a girl and proposes to her but she rejects him when he says that she cannot learn music. Audeh is close to proposing to his eighth wife in another refugee camp until he is told by her that he need not marry to get a son - he could get two if he adopts any of the hundreds of boys in the camp. Audeh is amazed and he does. Finally they are told that Hanareh is in the Iraqi side, and it was best that Mirza travel alone. Any young man is made to join the army.

Leaving his two sons behind Mirza braves the cold and the terrain to find Hanaraeh. He finally finds where she lives, in a refugee camp for only women, but she refuses to meet him as she is affected by chemical weapons. Then we hear of the chemical weapons, the mass graves, the thousands of casualties and the horrors that Saddam Hussein unleashed on these people. Mirza buries his old friend Sayed who had died some times ago but had wanted only Mirza to bury him. Then he is given possession of Hanareh's daughter and is asked to take her with him. As he leaves, we see Hanareh's eyes following him from a tent and other women telling Hanareh to meet Mirza because he came all this distance to see her. She says she would not meet him without her voice that got affected by the chemicals and her diseased body. Mirza takes his love's daughter with him.

'Marooned in Iraq' is a wonderful love story to me. Of the great love between Mirza and Hanareh, of Mirza and his friend Sayed, of the sons and their father, of the husband and his seven wives, of the man and his motorcycle, of the people and their country, of the musicians and their music. Mirza's love stands tall just as his friendship with his band mates Sayed and Hanareh who seem to share something else between them, something divine. All else fades in the background of this love of an old man and his old friends - not even the chemical war between Iran and Iraq can stop that. If there is a message for me from this movie it is that love conquers all. If ever you get a chance to watch this delightful movie, don't miss it. I recommend it highly.
Posted by Harimohan at 12:48 PM